Tight at the Top as Canada Cup Reaches Final Table

Just four big blinds separate the top three players at the PokerStars Canada Cup final table, with all nine players well stacked for the climax of the event. 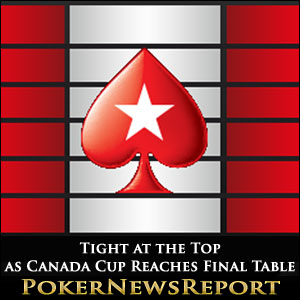 Just four big blinds separate the top three players at the PokerStars Canada Cup final table, with all nine players well stacked for the climax of the event.

Day 4 of the PokerStars Canada Cup saw the remaining twenty-seven players reduced to a final table of nine in just over five 90-minute levels. It was a tense day of action due to the big pay jumps as the final table approached, and one which saw the elimination of all the major stars still remaining in the event.

At the end of the day chip leader Thiago Nishijima has the narrowest possible advantage (one ante) over second placed Justin Miller, with Vincent Jacques less than four big blinds in arrears on a well stacked final table that sees the shortest stacked player – James Armstrong – with a comfortable 26 big blinds.

Duhamel and Silverman among the First to Fall

Jonathan Duhamel and Steven Silverman were among the shortest stacked players when play resumed at Montreal´s Playground Poker Club yesterday, and their participation was to last less than one level – Duhamel being eliminated by Antonio Esfandiari in twenty-fifth place A♦ 4♦ > K♣ 9♣ and Silverman falling in twenty-fourth place 7♥ 7♦ > K♥ 9♥ against Francois Binette.

The last lady standing – Laurence Grondin – was bust in twentieth place when she ran her A♦ 7♣ into Robert Notkin´s A♥ J♦, and she was joined on the rail shortly after by Marc Andre Ladouceur who had the misfortune to run his pocket Jacks into James Armstrong´s pocket Kings and be eliminated in nineteenth place.

Amir Babakhani left the Canada Cup in fifteenth place when his 5♥ 5♣ failed to hold against Rayan Chamas’ K♥ J♦, and Francois Goulet did his prospects of a good score no harm when busting out McKenzie James Liebzeit in fourteenth place 8♣ 8♠ > A♠ 10♠.

Miller then Nishijima Take Over at the Top

Justin Miller jumped into the chip lead with the elimination of Kevin MacDonald in thirteenth place (9♦ 7♦ > A♥ 2♦), while over on the second feature table Thiago Nishijima was chipping up at the expense of WSOP One Drop winner Antonio Esfandiari.

Esfandiari´s chip stack recovered a little when he bust Francois Binette in eleventh place K♦ Q♦ > A♠ J♥, but Nishijima continued to take chips from Esfandiari for fun, and Esfandiari was eventually to be the final table bubble boy when getting the last of his chips in with K♠ Q♠ and running into Robert Notkin´s A♥ Q♥ – Notkin making trip Aces on the flop.

Looking Ahead to the Canada Cup Final Table

When the final table of the Canada Cup gets underway at the Playground Poker Club this afternoon, the nine remaining players will be just a couple of hands into Level 26 (blinds 20,000/40,000 – ante 5,000). Each of the remaining players has already locked up CAD$36,600, but their focus will be on the CAD$366,660 first prize that is reserved for the winner, along with the kudos of being the first PokerStars Canada Cup Champion.