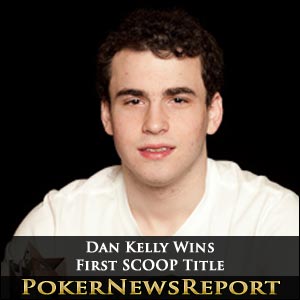 However, no one could halt Kelly’s path to glory as the Melbourne youngster added another online title to his ever-growing PokerStars collection as just 19 entrants made it into Day 2 – although the champion came close to exiting during level 31 on Day 1 before taking down a huge pot with Big Slick against the queens of Israel’s ‘Killer_ooooo’ when an ace on the flop took the eventual winner back into third place.

The crazy betting didn’t stop there, however, as Kelly replied with a 1,666,666 bet, only for ‘pistons87’ to stick in 2.4 million, before the Aussie then shoved 11.1 million to have the Canadian all-in.

He would have been happy to show his 3♦ 5♦ hole cards for trip fives, but Kelly turned over 5♣ A♥ to have a better kicker. Just three cards could help ‘pistons87’ – all threes! – but the 10♠ turn and K♠ river weren’t what he was looking for and that was that as the runner-up left disappointed.

In case you missed it, Canadian Shawn ‘buck21’ Buchanan became latest big-name pro to add his name to the list of SCOOP champions when taking down his first title, the $2,100 buy-in (high) Razz event #28, for $44,145 and a Movado watch.

British Columbian Buchanan – who has one World Poker Tour (WPT) success to his name – will no doubt be thrilled to have added a SCOOP crown to the WCOOP $530 buy-in Pot-Limit Omaha title he secured back in 2007 for $112,445.

British player ‘sulbystar’ started his head-to-head with Buchanan holding a slight chip advantage of 207,631 to 197,369, only for the Canadian to steadily chip up until his opponent was all-in for his less-than-20,000 stack on fourth street during the final hand.

Poker News Report will have more SCOOP updates for you, so make sure to check back here often. In fact, why not bookmark us to make it easy to return.