The fourth UKIPT “Series” event was hosted at London´s Hippodrome Casino this weekend, with Thomas Postlethwaite walking away with the £14,790 first prize. 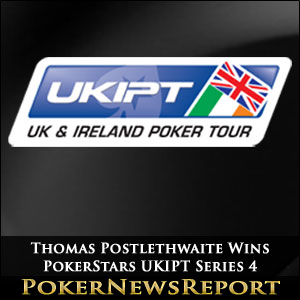 The fourth UKIPT “Series” event was hosted at London´s Hippodrome Casino this weekend, with Thomas Postlethwaite walking away with the £14,790 first prize.

Despite next month´s UKIPT Nottingham £1million guaranteed Main Event currently being the focus for many UK poker players, there was a good turnout for the fourth PokerStars UKIPT “Series” event hosted this weekend at the Hippodrome Casino in London.

314 players ponied up the £275.00 buy-in or qualified online at PokerStars.com for the event and, after three opening flights on Friday and Saturday, 91 players returned yesterday to play out the conclusion of the tournament.

Overnight chip leader Victor Nikolaevich Ilyukhin was the unfortunate bubble boy when his Eight-high straight was bested by Matthew Stock´s Nine-high straight – assuring the 47 remaining players of a £435.00 min-cash – and thereafter a frenzy of eliminations followed; meaning that the final table was set shortly before 6.00pm.

Darkin Under Pressure from Postlethwaite and Torres

With blinds at the final table starting at 12,000/24,000 (ante 3,000), it did not take long for the short-stacked players to make their moves. Adam Carroll (A♦ 8♥) was unlucky to be bust in ninth place when Thomas Postlethwaite (A♣ 2♦) spiked the 2♣ to move closer to Sam Darkin – who took a massive knock to his chip stack when doubling up Alejandro Torres Q♦ Q♥ > A♦ K♥.

Torres took a temporary chip lead when eliminating Richard Paul in eighth place A♠ Q♦ > A♣ 8♣, but Darkin leap-frogged back to the top of the leaderboard when busting Javier Estevez A♦ Q♠ > 6♠ 6♣, before he cemented his chip lead at the end of Level 24 when sending Philip Szeto to the rail in sixth place A♠ J♥ > K♥ Q♦.

Five handed play lasted just a few hands, and the field was reduced to four players after Tobias Kirby-Hogarty ran his A♥ 3♣ into Alan Pike´s A♠ K♥. Unfortunately for Alan Pike he could not maintain his chip stack, and lost the last of it in a battle of the ever-increasing blinds against Sam Darkin – shoving pocket Nines into Darkin´s pocket Aces and being sent to the rail in fourth place.

Sam Darkin´s dominance of the PokerStars´ UKIPT Series 4 event looked like it was never going to end after he flopped Quad threes to take a big slice of Alejandro Torres´ stack, but it was Thomas Postlethwaite who took a narrow advantage into the heads-up after eliminating the Spaniard in third place A♣ 6♦ > K♣ 6♠.

Postlethwaite: A♥ 3♥ for a straight

The river failed to deliver the Ace or Six Sam Darkin needed for a chop, and the title of UKIPT Series 4 Champion went to Thomas Postlethwaite.