The 2011 World Championship of Online Poker drew to a close over the weekend, with victory in the $5 million guaranteed Main Event going to Thomas “Kallllle” Pedersen from Denmark. 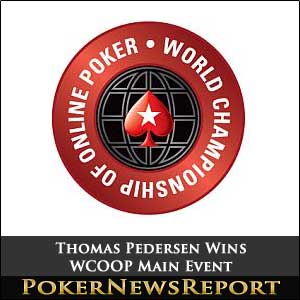 The 2011 World Championship of Online Poker drew to a close over the weekend, with victory in the $5 million guaranteed Main Event going to Thomas “Kallllle” Pedersen from Denmark.

Thomas Pedersen rose from being in the middle of the pack with just three tables remaining, to dominate the final table, claim the $1,260,000 first prize and championship bracelet. Speaking in a post-match interview, Pedersen said his next goal was a live Championship, and he could be making the short journey across the North Sea this week to compete in the EPT London.

Big Nemo Forces Tie at Top of WCOOP Leader Board

The Main Event was also the final tournament in which players could earn points for the WCOOP Leader Board competition. Having been out front since the first week, Joel Adam Brown (“2FLY2TILT”) was caught on the line by Canada´s “big_nemo”, with Daniel Negreanu (“Kid Poker”) holing out in third. The two winners will each receive an EPT Season 8 Grand Final prize package, 2012 SCOOP Main Event ticket, 2012 PokerStars Caribbean Adventure package, and a Special Edition Chip Set. Negreanu wins a SCOOP entry and a chip set.

The WCOOP Surpasses Guarantees by More Than 50%

The WCOOP Main Event smashed it $5 million guarantee by sharing out $8.135 million to the 189 players who made it through the bubble on Day 2. This level of “over-subscription” was typical of the 61 Championship tournaments which had preceded the Main Event. Originally, the whole series had been guaranteed with $30 million in prize money, but throughout the three weeks of the World Championship of Online Poker, PokerStars distributed $47,120,800.00 in prize money – making it the third most successful series of all time without any Yankee dollars contributing to the pot.

Moving to Canada can be Good For You

With the absence of players from the USA, Canada took top place in the prize money tables – winning $6,473,000 of the cash on offer. Despite Thomas Pedersen´s fantastic effort in the Main Event, Denmark did not feature near the top of the country standings for total amount of money won – with Russia finishing second, the UK third and Germany fourth. Canada and Russia also provided the 1-2 for the most number of cashes and tied for the number of players from each country who reached the final tables of the 62 events. Russian players won a total of 10 WCOOP events, with the UK in second, the Netherlands in third and Canada in fourth.

No Rest for the Wicked

The next major online poker event (for UK poker players at least) happens tonight at 7.25pm (BST), when PokerStars are hosting an EPT London Super Satellite with 10 packages guaranteed for the EPT Main Event which starts on Friday (travel expenses, accommodation and entry in the EPT Main Event). The buy-in is £525.00 and PokerStars will be adding further packages for each £8,000 in the prize pool. If the £525.00 buy-in is a bit steep at short notice, qualifiers for the Super Satellite are running throughout the day from just £3.30.