Thomas Muhlocker let the other players in the High Rollers Event cut each other´s throats before coming from behind to beat Daniel Negreanu in the heads-up. 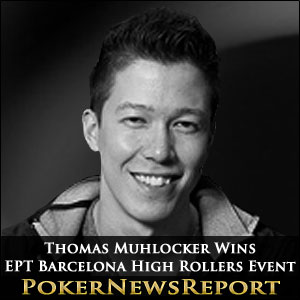 Thomas Muhlocker let the other players in the High Rollers Event cut each other´s throats before coming from behind to beat Daniel Negreanu in the heads-up.

The final table of the EPT Barcelona High Rollers Event was an extremely fast-paced affair, with the presence of Jonathan Duhamel, Daniel Negreanu and Ole Schemion ensuring that there would be no lack of action throughout.

Joni Jouhkimainen – who came third in last year´s EPT Barcelona Main Event – entered the final table as chip leader, but players such as high-roller regular Jean-Noel Thorel and November Niner David Benefield were queuing up behind the Finn.

With blinds of 10,000/20,000 – ante 3,000 (Level 21), the players at the table were well-stacked – especially after David Benefield was able to score an early double-up against Joni Jouhkimainen 9♥ 9♣ > A♥ J♦ and then Ole Schemion repeated the feat A♣ Q♦ > Jean- Noel Thorel´s K♠ K♦. As one level passed with no eliminations, it looked like the players could be in for a long session, but then the fireworks started in Level 22.

Daniel Negreanu bust Raoul Refos in ninth A♣ 2♣ > 10♣ 2♥ before Ole Schemion conducted the dual KO of David Benefield (A♦ J♥ > A♣ 8♥) and Richard Yong (A♠ A♥ > A♦ J♣) to reduce the field to six. Negreanu and Schemion clashed when Negreanu got all-in with a flopped set of Tens – and doubled up against Schemion´s (A♦ 4♦) missed draw – to take the chip lead in the tournament, and Jonathan Duhamel improved his stack with a four-bet pre-flop shove which enabled him to take chips from Negreanu, Thorel and Jouhkimainen.

Having had his chip stack badly hurt by Negreanu in the previous level, Ole Schemion tempered his natural exuberance as long as he could in Level 23, but he could not resist one more throw of the dice with A♣ J♠ towards the end of Level 24. Jean-Noel Thorel made the call with 9♦ 9♣ and, with the board blanking for Schemion, the young German was sent to the rail in fifth.

Schemion was soon followed out of the EPT Barcelona High Rollers Event by Jonathan Duhamel, who responded to Thomas Muhlocker´s pre-flop three bet by shoving all-in with A♠ K♦. Muhlocker made the call with 10♥ 10♣ and looked as if he was about to be crippled when Duhamel hit the flop of 9♥ J♠ K♥. The 2♠ on the Turn helped neither player, but the Q♥ on the River gave Muhlocker a straight and eliminated Duhamel from the tournament in fifth.

Negreanu in the Ascendancy

Daniel Negreanu has made the headlines recently for his vociferous opposition of the “first card” rule, but at the final table of the EPT Barcelona High Rollers he showed why he is regarded as one of the best poker players in the world. Following Duhamel´s departure, Negreanu totally bossed the table – forcing Jean-Noel Thorel and Joni Jouhkimainen out of big pots to chip up beyond 4 million.

Thorel looked like making a fight of it when eliminating Jouhkimainen in fourth A♣ A♠ > 10♠ 10♦, but then he missed his draws to a straight and a flush to pass his recently acquired chips over to Negreanu, and folded a big pot to the chip leader after he had made top pair on the flop – but Negreanu hit a pair of Aces on the Turn. The only dent in Daniel Negreanu´s apparent invincibility was when Thomas Muhlocker quietly doubled up A♦ 7♦ > J♦ J♣ and, just before the dinner break, Muhlocker repeated the feat – this time against Thorel – Q♦ J♦ > A♥ 9♦.

Despite the almost 7:1 chip disadvantage, Thomas Muhlocker did not roll over and die. In the first hand of the heads-up he doubled-up A♦ A♣ > 4♣ 4♥ and then forced a fold out of Negreanu with a substantial bet on the Turn of a board showing Q♠ 7♦ 4♦ / 7♥. Muhlocker then did the double over Negreanu again 9♠ 9♦ > 4♠ 4♦ to take the chip lead for the first time in the event.

AQ – The Most Expensive Hand in Poker

Following the flop of K♥ 10♣ 9♥, Negreanu needed a Jack to make a Broadway straight, but the Turn (5♠) and River (6♥) blanked for the five times WSOP bracelet winner and Thomas Muhlocker had achieved an unlikely success in the EPT Barcelona High Rollers Event.