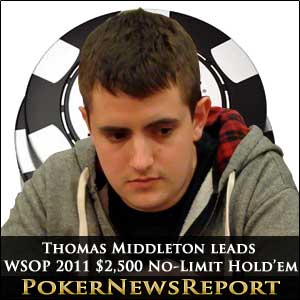 Just five players remain in contention for the Word Series of Poker (WSOP)’s $2,500 No-Limit Hold’em event and the top prize of $749,610 after the third day of play in the Amazon Room of the Rio All-Suite Hotel & Casino in Las Vegas last night.

Yorkshire’s Middleton attracted a noisy rail throughout the day as his fellow Brits enjoyed the Vegas hospitality – downing beer after beer to provide their favourite with some extremely vocal support as the alcohol took hold.

Middleton might well be on course for a WSOP title in event #36, but he’ll have to defeat some experienced players to do so, including New York State’s Thomas Miller – who was chip leader for most of day three before a late slip took him back down to fifth place on 1,885,000 – while former Asia Pacific Poker Tour (APPT) champ Eddy Sabat, from California, Lakhitov and Babajane will also be eyeing up that gold bracelet.

As all five strive to collect their first WSOP bracelet from an event that possesses a $3,944,850 prize pool, there was a thrilling end to last night’s play with the largest pot of the tournament.

In the small blind, Middleton raised it to 200,000. Miller, in the big blind, called and the flop showed Jc-Jd-Ks. Englishman Middleton then opened with 250,000 and Miller quickly called.

The Ac came on the turn and, following a brief moment to consider his options, Middleton pushed in 550,000. Miller looked thoughtful, but then slid in his chips to make the call.

The 5c arrived on the river and Middleton announced he was all-in for just over two million. Miller sat very still for a few moments, considering a pot with about four million, before pushing his cards to the dealer to send the British fans wild with excitement as their man moved atop the chip leaderboard.