Germany’s Thomas Butzhammer battered the final table of the Grand Series of Poker (GSOP) Live Salzburg $1,650 buy-in main event to take home the title, the top prize of €62,760 and a Grand Final seat for April’s event in the Dominican Republic. 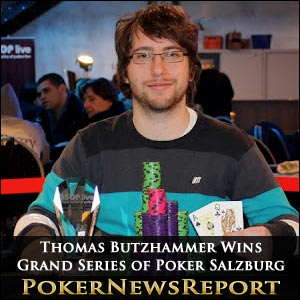 Germany’s Thomas Butzhammer battered the final table of the Grand Series of Poker (GSOP) Live Salzburg $1,650 buy-in main event to take home the title, the top prize of €62,760 and a Grand Final seat for April’s event in the Dominican Republic.

The chip leader following three days’ play in Gusswerk – on the outskirts of Salzburg – almost totally dominated the nine-handed final table, eventually defeating Austrian Markus Jenisch in their heads-up clash that left the runner-up with €40,580.

The fourth and final day of the GSOP stop in the historic town saw the seemingly always-active Butzhammer face up to Jenisch – who also showed great aggression throughout – in what was an extremely short heads-up encounter.

Just two hands into their head-to-head, it was all over and the German was crowned champion.

But Jenisch shoved all-in for about 1.3 million and was called by Butzhammer, who showed A♠ Q♣ to be in great shape against his opponent’s K♠ Q♥.

The 5♥ 7♣ A♣ flop gave Butzhammer top pair, while the turn of 6♣ and river of 3♥ changed nothing – and suddenly the German was champion, €62,760 richer and guaranteed a seat at the Grand Final in Punta Cana, which runs from April 21 to 28.

Jenisch, meanwhile, left Gusswerk with €40,580 for his runner-up spot, while third place and €27,540 went to another Austrian in Manfred Ronacher.

The first player to be eliminated from the nine-handed final table was Rosengard, when his K♠ 8♥ lost out to Butzhammer’s 10♠ 10♦.

In middle position, the Swede shoved all-in for about 140,000 and was called by Butzhammer, who was on the button, to leave the former needing a king to avoid elimination.

However, Rosengard was gone when the board showed Q♣ 7♦ 5♣ A♣ 6♦, while Butzhammer found himself with even greater control of the final table as his chip stack moved to 1,160,000.

Eighth place went to home favourite Toubib when his luck ran out in a hand with Urban.

Toubib shoved all-in for his last 122,000 chips after Urban had opened for 50,000. Every other player folded before the action was back on the Hungarian, who called to reveal K♣ 10♠.

Urban found himself way behind as Toubib showed A♥ J♦. However, the flop of Q♦ 6♦ 6♠ flop was no good to Urban, while the 10♥ turn left him with only six outs as the river was dealt.

Again, though, he found no assistance as the 4♣ meant we were down to just seven players.

Not that Urban survived much longer as he hit the rail in seventh when he moved his remaining 150,000 chips into the middle with A♥ 8♣ to be faced by the dominating A♠ J♦ of Butzhammer.

The J♠ 8♠ 3♥ 2♦ K♥ board gave Urban a pair of eights, but also handed Butzhammer two jacks for the knockout.

Hofmann left the table in sixth place in what was a strange hand against Ronacher that saw the former call off his 300,000-plus stack on the river following the latter’s all-in shove.

Breitfuss got the action underway with a 60,000 bet, only for Ronacher to raise that to 148,000. Big blind Hofmann made an unusual call when placing about one-third of his stack into the pot, resulting in Breitfuss folding to leave the hand heads-up.

Both players checked the A♣ 6♠ A♦ flop and Q♦ turn, before Ronacher shoved all-in on the 8♠ river.

In what seemed a peculiar decision – especially as he had played tight throughout the final table – Hofmann quickly called to table J♠ J♣ for two pair.

However, the flop had left him already crushed as Ronacher, with A♠ 6♥, had found a full house to move into the chip lead on about 1.7 million.

But Breitfuss and Butzhammer then got involved in a massive pot that saw the German’s A♣ Q♣ hold up against his opponent’s A♠ 9♣ for the chip lead on approximately 2.45 million.

Butzhammer notched up another final-table elimination when he sent Breitfuss to the rail in fifth place.

Butzhammer, with A♥ K♦, got all his chips in the middle pre-flop against Breitfuss’ A♣ Q♥. The board read A♠ 5♠ 3♠ J♠ 5♣, so the German to more than three million in chips – which was more than his three surviving opponents combined.

Finnish pro Rattya – now the short stack on less than four big blinds – didn’t last much longer either when his K♣ 5♣ lost out to the 8♦ 7♦ of Ronacher.

Butzhammer wasn’t quiet for long, though, and sent Ronacher out in third place when they got it all-in pre-flop.

Ronacher revealed A♥ J♠ while Butzhammer dominated with J♦ J♠. The flop of Q♣ Q♠ 9♦ did not help Ronacher at all, leaving him needing running cards for a straight or an ace for top pair.

However, the 4♣ turn was no good, while the 7♥ ended Ronacher’s tournament as Butzhammer moved into a commanding chip lead for his heads-up clash with Jenisch.

That meeting was, of course, over in two hands as Butzhammer secured the trophy and first place.