Having previously recorded second and third place finishes at GukPT Main Event Final Tables, it was third time lucky for Richard Trigg at the GukPT Blackpool. 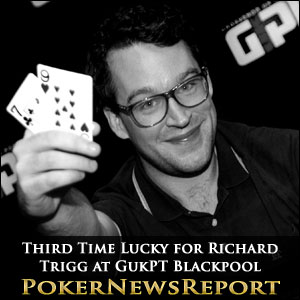 Having previously recorded second and third place finishes at GukPT Main Event Final Tables, it was third time lucky for Richard Trigg at the GukPT Blackpool.

The final day of the GukPT Blackpool Main Event was one of the best seen on the tour so far this year. Day 2 had seen the field reduced from ninety-one players to just sixteen, and had concluded with the elimination of last year´s winner Simon Deadman at the hands of Caicai Huang. But it was John Haigh who started the day as chip leader after a sensational hand in which he hit Quad Fives to cripple Jamie O´Connor – who had made a Full House!

Day 3 of the GukPT Blackpool Main Event started with blinds of 5,000/10,000 and six players with less than 20 Big Blinds. Several short stacks got their shoves through, and it was Day 1A chip leader Richard Pearson who was the first player to depart on the final day, when his A♦ J♣ failed to find the Ace he needed to improve past Caicai Huang´s J♦ J♥. Huang´s good run continued, and she bust Yusuf Erdam 9♣ 9♦ > 6♣ 6♥, before rivering a King to send Dean Swift to the rail in a Full House > Full House hand.

Caicai Huang took a massive chip lead to the final table after rivering a set of Tens to eliminate Syed Zaidi in tenth, with the respective chip counts looking like this:

Within several hands of the final table, Caicai Huang´s chip lead had evaporated. John Haigh got on level terms after winning a huge 750,000 chip pot against Huang 9♥ 9♠ > 6♣ 6♠ (both players flopped sets) and then John Miller (Q♥ 9♣) rivered a set of Queens to best Huang´s (A♦ K♦) missed Broadway straight and double up.

Richard Trigg forced Huang off a ½million chip pot to get on terms with new chip leader John Haigh, before eliminating Dan Pope in ninth 10♠ 10♦ > A♠ J♠;. Trigg then became the clear chip leader by default when John Haigh doubled-up Majid Khan 10♥ 10♠ > A♦ K♣ and dropped back below a million chips.

Richard Trigg extended his lead through two very slow levels of play by busting out Adam Forsyth in eighth (J♠ 7♠ > A♥ 5♦) and taking a slice of John Haigh´s chips (Q♥ J♥ > Q♣ 10♣) after both players had turned two pairs. Haigh recovered by busting out Kevin Steele K♥ K♦ > Q♠ J♣ in seventh, but the most impressive recovery of the afternoon was made by Caicai Huang.

Caicai Huang must have been demoralised after seeing her chip advantage evaporate so quickly, and she was reduced to her last 150,000 chips after doubling up Majid Khan Q♥ Q♦ > A♣ K♥. However, Huang twice doubled-up against John Haigh when starting with the worst hand (A♥ 6♠ > A♣ Q♥ and A♣ 6♠ > K♣ K♥), and she gained her revenge on Khan by busting him out in sixth A♣ 3♣ > Q♦ Q♥.

John Miller moved into second place on the leaderboard when his J♥ J♦ held in a 700,000 chip pot against John Haigh, but Richard Trigg moved further into the lead with the elimination of Kyle Hendry in fifth (A♣ 6♣ > 9♠ 9♣) and, at the dinner break, the four remaining players had the following chip stacks:

The final stages of the GukPT Blackpool were electric. With blinds now at 15,000/30,000 (ante 4,000), Caicai Huang and John Haigh both got uncontested shoves through and then Huang doubled up Q♦ J♥ > A♠ K♥ against Richard Trigg when she turned the 9♦ to complete her straight.

Incredibly John Haigh then moved into the chip lead when flopping a set of Sevens to double up against John Miller´s missed straight draw, and Miller was sent to the rail in third place when Richard Trigg´s A♠ 10♣ was too good for Miller´s K♣ 2♣. Going into the heads-up, just eight big blinds separated John Haigh and Richard Trigg (2.4 million chips -v- 2.1 million chips), and the two players decided to split the prize money equally and continue playing for the GukPT Blackpool title.

The first 45 minutes of heads-up play was fairly timid, and the two players swapped the lead several times without either being able to capitalise on their advantage. Eventually John Haigh (2♠ 4♣) made a move on the board of 7♦ 3♦ 6♣ / A♥ and bet for 250,000 chips. Richard Trigg (7♣ 9♥) made the call, and checked following the 9♦ River. John Haigh moved all-in, but his attempted bluff back-fired, as Richard Trigg was sitting on two pairs and he made the call which won him the GukPT Blackpool Main Event.

It was third-time lucky for Richard Trigg, who had appeared on two GukPT final tables previously – finishing third to Mahzar Nawab at GukPT Coventry in Season 1, and runner-up to Julian Thew – again in Coventry – in Season 5. Trigg took home £53,000 for his victory, with the other final table payouts looking like this: