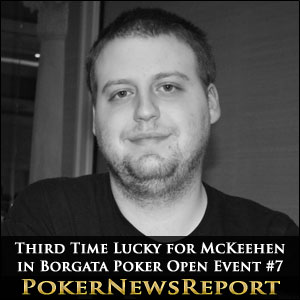 Joe McKeehen won a sensational climax to Event #7 of the Borgata Fall Poker Open, coming back from a chip deficit of 12.8 million -v- 1.4 million with three back-to-back double-ups, to claim his first Borgata Poker Open trophy and the prize of $30,963.

Play on Day 1 was halted when the money bubble had burst, and twenty-seven players returned for Day 2. The final table of nine was set after four hours of play, when Todd Michael shoved the last of his chips in with Ace-Ten, and failed to improve past the pocket Sixes of Monica Dorenkamp.

DeQuatro Bursts into Lead, While Walsh becomes the Short Stack

Despite blinds being 30K/60K (ante 5K) when the final table started, there was not a lot of early action. Guy Maxtone-Graham was the only player to depart during the first level (KQs < Cornel Cimpan´s KK), and a double up by Chris DeQuatro against Dan Walsh (KK > 97s) reversed the positions of the two players on the leaderboard.

Dan Walsh moved back into the lead when his pocket Sevens held against the Ace-Jack of Rob Hanes to bust Hanes out in eighth, and Joe McKeehen joined Walsh at the head of the chip counts when eliminating Josh Supsak AK > AJ. A huge double up by Chris DeQuatro over Dan Walsh (Kings > Nines) gave DeQuatro the chip lead at the first break of the day, with Walsh now replacing Jay Zimmet as the short stack.

When the players returned, the blinds had risen to 60K/120K (ante 20K), but rather than either of the short stacks being the next to leave the Borgata Poker Open Deepest Stack Event #7, it was Monica Dorenkamp who bust from the tournament in sixth; having run her Queen-Eight into the Ace-King (suited) of Joe McKeehen, whose hand went on to complete the flush.

Joe Walsh was also soon to leave, despite having the best hand (Ace-Four -v- King-Jack) when all his chips went in against Joe McKeehen. McKeehen paired both his cards, while Walsh missed all his, and the former chip leader was sent to the rail in fifth – shortly to be followed by Jay Zimmet, who had valiantly clung onto his short stack of chips for more than three hours, before moving the last of them in with Ace-Eight, and finishing second best to Chris DeQuatro´s Ace-King.

With three players left, the destiny of the Borgata Fall Poker Open trophy seemed to be between Joe McKeehen (6.5 million chips) and Chris DeQuatro (5.5 million chips), but Cornel Cimpan (< 1 million chips) doubled-up against both his opponents – AK > A5 -v- McKeehen and JJ > QQ -v- DeQuatro – to stay alive until the dinner break.

After dinner, a crazy sequence of events occurred, which saw (in fifteen consecutive hands) … …

… which left Joe McKeehen as the short stack of the three players, Tweeting:

McKeehen Bounces Back, Cimpan Busts – and then the Game Gets Really Crazy

Incredibly, Joe McKeehen bounced back to take the chip lead by winning two major hands just as the blinds increased to 150K/300K (ante 40K). In the first he doubled up against DeQuatro Ace-Nine > pocket Eights, and then, in the second, forced DeQuatro off a massive pot when moving all-in on the flop and Turn of 10♠ 10♦ 9♠ / 2♠.

Cornel Cimpan´s elimination – three hours after three-handed play had started – came when he moved all-in with Ace-Five against Joe McKeehen´s King-Nine. Two Jacks and a Ten on the flop gave McKeehen a draw to a gutshot straight, which he hit when a Queen was dealt on the River, and Cornel Cimpan was out of the tournament in third – Joe McKeehen taking a 7.8 million -v- 6.4 million chip advantage into the heads-up against Chris DeQuatro.

Chris DeQuatro doubled up in the first hand of the heads-up (King-Jack > King-Ten) to reduce Joe McKeehen to 1.4 million chips (just 3 Big Blinds), and this happened:-

In the space of eleven hands, the player at risk had doubled up seven times, and Joe McKeehen now had a 10.8 million -v- 3.4 million chip advantage over Chris DeQuatro. The next hand broke the trend as the player at risk – DeQuatro – moved all-in with 5♥ 4♥ and was called by McKeehen with 8♠ 8♦.

The flop of K♥ Q♠ 4♠ gave Chris DeQuatro several opportunities to win the hand – and most onlookers a sense of déjà vu – but the K♠ on the Turn took some away (the 5♠ would have given McKeehen a spade flush), and the 8♥ gave McKeehen a set of Eights and victory in the Borgata Fall Poker Open Deepest Stack Event #7.