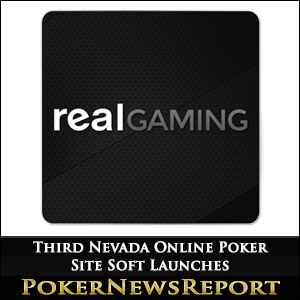 RealGaming.com is the third company to enter the regulated Nevada online poker market after Ultimate Poker and WSOP.com launched last year; despite being the first online provider to be approved by the Nevada Gaming Commission back in August 2012 under its previous identity – South Point Poker.

At the time, South Point Poker was granted licences as a manufacturer, a service provider and an operator, and – according to South Point CEO Michael Gaughan – the reason for the delay in launching RealGaming.com was that they wanted to create a multi-platform client and get it right.

Full Site to be Launched Over Time

While RealGaming.com remains in soft-launch mode, the site will be tweaking its current product and then introducing new elements as the site develops. The software for the web-based online poker site was built from scratch, and that allows the developers to make immediate changes as necessary before the site goes into full launch mode.

According to Gaughan, RealGaming.com is not in any hurry. Speaking with Pocket Fives´ Dan Cypra he said:

When it comes to the soft launch, because this isn’t a small undertaking, we’re starting very small in the sense that we’re not doing any campaigns and not launching all of our features in one go.

Gaughan believes that the timing of the soft-launch does not matter a great deal because he feels online poker in Nevada is still in its infancy. The profitable future of online poker sites in Nevada is likely to depend on the forming of compacts with other States, but Gaughan ruled out California as a possible partner in the near future due to multiple parties pulling and pushing in different directions.

The poker product offered by RealGaming.com differs from its Nevada rivals in that it is a web-based poker client which requires no download and can be played on Android and iPhone devices. In order to play online poker at RealGaming.com, players have to first create their accounts and download the mobile app.

At the start of each session, players are sent a numbered token by SMS. The number has to be entered into an authorisation box along with the last four numbers of the player´s social security number and the CAPTCHA code which appears during the log in procedure. Funds can then be deposited into accounts via cheques, electronic cheques or bank transfer, or by depositing cash at the cashier´s cage at the South Point Casino. Currently, the only withdrawal option is a cheque.

The only games being offered during the soft-launch period are full-ring cash games of NL Texas Hold´em, with stake limits starting at $0.01/$0.02 and rising to $5.00/$10.00. The tournament lobby is currently empty, but multi table tournaments are scheduled to be launched this coming weekend.

A Real Rewards program has also been established – awarding players 2 Real Rewards Points for each $1.00 contributed to the rake deducted from cash game pots or paid to enter tournaments. Players will be able to redeem the points they are awarded for cash bonuses (100 Points have a value of $1.00) and points multipliers within the seven-tier Real Rewards program will make it worthwhile for high stakes players to get involved with the site – provided it generates enough traffic to make the grief of logging in worthwhile!