After witnessing the success of the recent Seminole Hard Rock Poker Open, the WPT decides to up the ante for its own event. 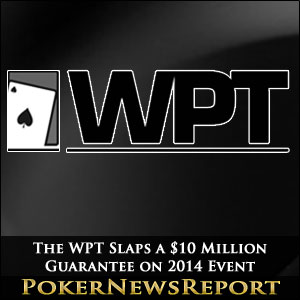 After witnessing the success of the recent Seminole Hard Rock Poker Open, the WPT decides to up the ante for its own event.

Florida is well-known for its card rooms, popular tribal casinos and horseracing destinations. But no one knew just exactly how popular poker was in the Sunshine State before this year’s Seminole Hard Rock Poker Open. Boasting a $10 million guarantee and a $5,300 entry fee, some felt that the event would not have enough entries to cover its guarantee. They were wrong; very wrong.

Not only did the Poker Open cover its lofty guarantee, it shattered it. In total, the prize pool for the event was approximately $12,000,000. WSOP bracelet winner Blair Hinkle would win the title, followed in second by renowned pro Justin Bonomo. Hinkle’s victory was worth an astonishing $1,745 million. Bonomo would also take open a seven figure prize. In total well over 2,000 were recorded for the event.

Apparently, the widespread success of the event caught the attention of the WPT, as its recently decided to increase the guarantee of its own Seminole Hard Rock Casino event to $10 million. The previous guarantee: $2.5 million.

To shed some light on how big the event is expected to be, last year’s Borgata event, which typically draws an enormous amount of runners, featured a less than $4 million prize pool. Even the $25,000 championship paled in comparison to the expected turn out and prize pool at the Seminole Hard Rock Casino early next spring.

The buy-in for the 2014 WPT event will be the same as this year’s main. It will also feature reentries. A date has not yet been set for the event, but it is expected to take place somewhere in early April, which is also around the time of the WSOP Asia-Pacific Main Event. Also running at that time is the EPT Sanremo.

It is expected that some big time pros will skip the prestigious EPT and WSOP events in order to play with a sea of Floridian fish.

The World Poker Tour has been owned by bwin.party (PartyPoker) since 2009. It was purchased for roughly $12 million, which ironically was the approximate prize pool of the Seminole Rock Hard Poker Open. How’s that for perspective?