The party city of Cyprus will host this year’s inaugural event. 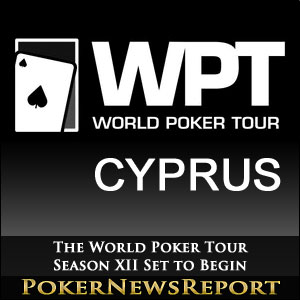 The party city of Cyprus will host this year’s inaugural event.

On August 12, Season XII of the World Poker Tour will kick off in grand fashion at Cyprus’s own Merit Crystal Cove Casino and Resort. There, 34 preliminary events and a WPT Main Event will take place over the course of the next two weeks. In total, over $3 million dollars in guaranteed prize money will be given away.

The Main Event, which admittedly is one of the smallest mains on the tour, will feature a $4,400 buy-in and a $1 million guarantee. As expected, there will be two starting flights, with the first one taking place on August 16th. In order to juice up the prize pool, tournament directors have decided that anyone who busts on Day 1a will be allowed to reenter on Day 1b. Reentry tournaments are becoming an increasingly popular trend in tournament poker, and one that the WPT has embraced.

All eyes will be on German pro Marvin Rettenmaier as he attempts to win the tournament for an unprecedented second time in a row. Rettenmaier shocked the poker world last year by capturing back-to-back WPT titles at the Season X WPT Championship in Las Vegas and the inaugural Main Event of Season XI. Since then the young phenomenon has cashed in six WSOP events, and has won three other events outright.

Due to its exotic location, awesome action and beautiful surroundings, The Merit Crystal Cove was chosen to host the first WPT Main Event – its second time doing so. Cash games are expected to run around the clock and the poker room will include amenities not often found in stateside casinos including: cigars, top-shelf alcohol, and a hot buffet.

Also, the Merit is known to thrown one of the most awesome parties around. This year will be no different as premier DJ Eric Cubeechee and Girls Rock are set to make appearances. Poker player and brother of Michael “The Grinder” Mizrachi, Donny Mizrachi will also be spinning.

Party Poker will play host to a high-stakes cash game that will coincide with the Main Event. High-stakes cash players from all over the world, including the notorious Tony G, have already signed up. All in all, it should make for an interesting week.