The World Converges on EPT Barcelona

To say that poker is an international sport would be an understatement in light of the entry list for the Main Event of the PokerStars sponsored EPT Barcelona. 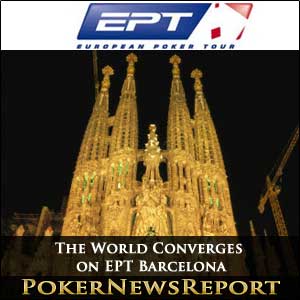 To say that poker is an international sport would be a complete understatement in light of the entry list for the Main Event of the  PokerStars sponsored European Poker Tour taking place in Barcelona this week.

An incredible 37 nations were represented in the combined entry of 811 – many of them having qualified through online satellites in countries as diverse as Argentina and Azerbaijan. All of them hope to claim some of the €4,050,000 on offer, with cashes ranging from a first prize of €850,000 down to the 120th player receiving a very worthwhile €8,000 for the €5,300 buy-in.

407 players remain in the tournament after the two Day 1s, which saw a quality field comprised of world champions and qualifiers compete across the table from each other in the Battle of Barcelona. Some of the top names who made it through to Day 2 include current WSOP champion Jonathan Duhamel, Jason Mercier, Vanessa Selbst, Daniel Cates and Eugene Katchalov. They will be joined by British survivors which include Chris Moorman, David Vamplew and Max Silver, and a legend from the world of sport – Boris Becker. Those who will spend Day 2 on the beach in Barcelona include Daniel Negreanu, Chris Moneymaker, Viktor Blom and Annette Obrestad, and UK poker players Rupert Elder, Jake Cody and Liv Boeree. That should make an interesting picnic!

The international flavour of the tournament was confirmed with the overnight chip counts which revealed nine different nationalities among the top ten poker poker players. Topping the lot is French poker star Guillaume Darcourt who won the WPT Main Event in Bucharest last year and finished 35th in this years´s WSOP Main Event for almost a quarter of a million dollars. Darcourt might be in everybody´s favourite position, but finds himself on a tough table for Day 2 which includes the Spanish “Estrellas” Tour leader Alvaro Santamaria and Team PokerStars Pro, Victor Ramdin.

Barcelona EPT Chip Counts at the Start of Day 2