The Week in Online Poker: Ivey Gets Crushed

Has one of poker’s greatest minds lost his edge? 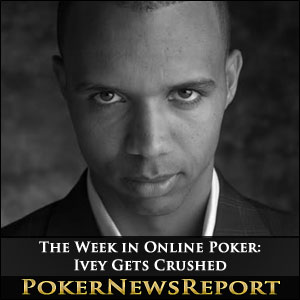 Has one of poker’s greatest minds lost his edge?

Phil Ivey – winner of nine WSOP bracelets, one WPT title, high-stakes cash game specialist and loser of almost $700k in a seven day span. Yes, in just over 2,300 hands, the notorious Phil Ivey lost an average of just over $295 a hand. And while that might be lunch money to Ivey, it raises the question: Is Phil losing his edge?

Ivey did win a bracelet this year, but it was at an event that only featured 81 participants. It was also at the less renowned WSOP Asia-Pacific. At the WSOP Las Vegas, Ivey only cashed once for a paltry $15k, for the most part looking tired and bored. And now, Ivey is down a staggering $2.9 million at online poker, and that’s just in 2013 alone.

So what’s the deal? Has the most feared player in poker suddenly become a donkey? Well, not exactly. Ivey has openly admitted that outside breaking the WSOP bracelets record, he’s accomplished everything he could accomplish playing poker. He’s played regularly in some of the biggest cash games in the world (both online and live), has been everywhere and seen everything, and has won just about every major poker award ever created. Oh, and lets not forget that he’s worth so much money that no single buy-in amount could ever unnerve him.

But there’s more. To a degree, the game has caught up with Phil. Due to the influx of poker forums, reading materials and the explosion of online poker, players are getting better. The game is also getting younger. Each and every year, a new wave of young poker players seems to emerge onto the scene, hungry to improve their game. Ivey probably doesn’t have the same desire that he did in say, 2003.

Now, that doesn’t mean he’s still not the best all-around player in the world, it just means that he’s only truly great when he wants to be. Or maybe he just took a series of horrific beats this year. Who knows?

In other news, Issac Haxton got crushed for a second consecutive week, this time for “only” $492k. Gus Hansen, who at one point was considered dangerous, has clearly not adapted to today’s top young guns as he lost $574k this week and is down a whopping $4 million for the year.

Victor Blom, on the other hand, had his first winning session in a while, even if it was only for a measly $133k. He did however win over $1.4 million in a single day. Blom’s day started off like any other, winning $150k off Issac Haxton in a matter of hours. Then, he traveled over to the Omaha Hi/Lo tables and crushed Gus Hansen, Kyle Ray and Phil Ivey for $423k in just under 80 minutes – just another day in the life of a 23-year old Swedish superstar.

If anyone can recover from such a miserable year it’s Phil Ivey. But will the real Phil Ivey stand up, or will we continue to get the watered-down, tired version?