The Tropicana and Gamesys Forge a Deal 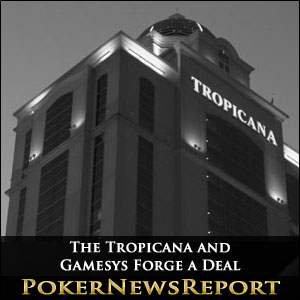 Tropicana Casino and Resort has officially entered the world of online gambling. Although it was widely speculated for over a month, the largely forgotten staple of Atlantic City did not confirm its alliance with Gamesys until Wednesday.

Gamesys is a UK-based software designer primarily known for the real-money gambling site Jackpotjoy.com. Online poker grinders have probably never heard of the site, and for good reason: Jackpotjoy only offers casino-style table games and online bingo, no poker.

However, this is poised to change. After acquiring Virgin Games, the company’s in-house development team reportedly started worked on developing proprietary poker software. Whether or not this software will be ready when the operation goes live is currently unknown.

Considering that a reported 37 online gaming companies applied for internet gaming licenses in New Jersey, Gamesys is thrilled to have found a partner with one of the 12 casinos eligible to house gambling software. Its founder and CEO Noel Hayden went on record stating, “We have always sought ambitious partners and Tropicana Atlantic City is a great partner for Gamesys as Internet gaming comes to New Jersey.”

The Division of Gaming Enforcement (DGE) has confirmed that each Atlantic City has chosen a partner. However, partnerships are not revealed until both parties work out the details of their arrangement. Gamesys and Tropicana have reportedly been working together since June, with Gamesys completing the application process before the July 31st deadline.

To date, there are only four other known partnerships: bwin has partnered with the Borgata, Ultimate Poker (which is already live in Nevada) is aligned with the Taj Mahal, the Golden Nugget with Amaya and PokerStars with Resorts. Clearly, Resorts hit the jackpot, as PokerStars stands to dominate the online poker market in New Jersey.

Other alleged partnerships include Trump Plaza with Betfair and 888 with Caesars, although these remain unconfirmed. Floundering casinos Revel and The Atlantic Club have yet to reveal their plans.

It looks like at least three online gambling sites will “go-live” in New Jersey by the end of this year. Unfortunately, no one knows which ones they’ll be.