The Russians are Coming as WSOPE ME Approaches the Money

Sergii Baranov surged into the lead after Day 2 of the WSOPE Main Event with compatriot Vladimir Troyanovskiy also in the top three as the bubble approaches. 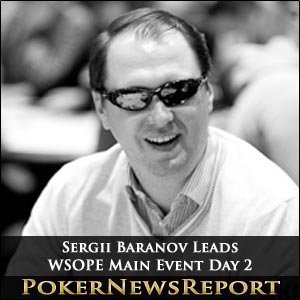 Sergii Baranov surged into the lead after Day 2 of the WSOPE Main Event with compatriot Vladimir Troyanovskiy also in the top three as the bubble approaches.

A fascinating Day 2 of the World Series of Poker Main Event saw the field reduced from 230 to just 77 as Sergii Baranov capitalised on some fishy play at the Majestic Barrière Casino in Cannes to chip up from an overnight 152,000 chips to an impressive 607,000 chips – 188 big blinds ahead of his nearest challenger Axel Pergolizzi (419,400 chips) with Troyanovskiy a further 44 big blinds back in third (375,100).

There was no bigger fish in the Majestic Barrière Casino than Michael “the Grinder Grouper” Mizrachi. Coming into Day 2 with a substantial chip lead, the Player´s Championship winner had enjoyed a significant amount of good fortune on Day 1B, and started where he left off by calling John Eames shove (set of Deuces) with J8 offsuit (paired the Eight on the Flop). The Jack on the turn gave Mizrachi two pairs and he took then hand when rivering a heart flush.

However, Mizrachi´s eagerness to be involved in every hand was soon to be his downfall. Losing 22,500 chips to a bemused Maxime Conte (4♣ 4♠) after initiating the betting on the river, Mizrachi´s demise was chronicled on Twitter by Daniel Negreanu who was seated alongside him

Mizrachi´s departure came on another fishing expedition, when he shoved with K♦ 10♠ into a player holding A♥ 4♥ and the ISPT ambassador had blown the opportunity of a third WSOP bracelet in a little more than five levels of play.

Whether the “Mizrachi Effect” was contagious or whether Ivey dwindles to a mere mortal when he is not playing poker with other people´s money is unsure, but something in the French air turned the eight-time WSOP bracelet winner turning into a calling station. Russian Konstantin Puchkov twice chipped up against Ivey during the early levels of Day 2 – getting all-in with A♠ K♥ (Ace showing on flop) against Ivey´s J♠ J♣ and then leading the former face of FTP all the way to the river, and getting plenty of value, with K♠ K♥.

Ivey´s demise came at the hands of another (former) Russian – Eugene Katchalov. Calling Katchalov´s (AQ) pre-flop raise with 8♠ 9♦, Ivey went fishing on the rainbow flop of Ax Jx 10x for a straight with his last 50,000 chips and blanked. Katchalov finished the day in a handy 46th position with 123,900 chips despite “doing an Ivey” and running his pocket Jacks into the A♦ A♠ of Tom McCormick late in the day.

Phil Hellmuth was in the thick of the action from the very start – taking a chance that nobody had hit trip Threes on a flop of Q♦ 3♥ 3♦ to get full value from his paired Queen in a three-way pot – however he was also guilty of some questionable calls. Feeling that he had “the luck of the devil” he called Adrien Allain´s shove with A♥ K♣ with only holding a pair of Sixes (Allain flopped a Broadway straight). Pocket Sixes did work for him next time however, hitting a set with 6♥ 6♠ on a flop of 7♣ 6♣ 3♥ against Stephan Gerin´s A♣ 10♣ and holding on to eliminate the player from Marseille.

Hellmuth then hit a runner-runner Flush to relieve Andrey Gulyy of 25,000 chips, bluffed Sebastien Guinand out of a 120,000 chip pot with 10♣ 5♥ and finished Robert Schiffbauer´s tournament (10♦ 10♥) when calling his shove with 7♠ 3♠ – the two players watching the unbelievable flop of 9♠ 7♥ 3♥ to give Hellmuth two pairs. Possibly Phil Hellmuth has inherited Michael Mizrachi´s good fortune and he finished the day on the (fish)tails of the chip leaders in fourth with 364,900 chips.

Meanwhile, at the Sensible Tables …

Those who played solid poker enjoyed a profitable day. Following Michael “the Grouper” Mizrachi´s departure, Daniel Negreanu was joined at his table by ElKy Grospellier – the pair finishing twelfth and tenth overnight. Last year´s winner, Elio Fox, chipped up nicely throughout the day to finish the day with over 200,000 chips in 26th place, while Justin Bonomo – who had started Day 2 with 54,000 chips and was down to 17,500 after the first level – recovered well to finish the night on 70,000 chips in 64th place and not far from the 48th position that will give him his twenty-third WSOP cash.

Chip leader Sergii Baranov himself enjoyed some good fortune – busting out Lock Poker pro Matt Stout (KQ<AK) when he caught an Ace on the river to hit a better two pair – but could have had an even bigger overnight advantage had he not called Salman Behbehani´s A10 shove with J4. Although looking good when pairing his Jack on the turn, Behbehani rivered a straight to keep the Englishman in contention overnight with 140,000 chips.

Salman Behbehani will be joined on Day 3 of the WSOPE Main Event by Sam Trickett, who was doing fine when busting Mike “Timex” MacDonald (A♠ 9♣ > 8♠ 8♣) for 56,000 chips until Steve Dannenmann rivered a gutshot straight against him to knock the Nottingham man down to 60,000 chips. Liv Boeree, Toby Lewis and Chris Brammer are amongst other British poker players still involved in the event, while Max Silver finished best of the Brits due to his J♣ J♠ busting out Vanessa Rousso (there´s a headline!) who called his shove with A♥ 10♦.

When play recommences at the Majestic Barrière Casino in Cannes at 12.00 noon today, there are six scheduled 90-minute levels, although play will stop for the day in the field is reduced to sixteen players beforehand. Blinds will be 1,200/2,400 with an ante of 400 chips, and those not concerned about the blinds just yet include:-