The Price is Right on Day 1B of UKIPT Nottingham

David Price finished top of the chip counts after Day 1B of the £500,000 guaranteed UKIPT Nottingham Main Event, which potentially could have a massive overlay. 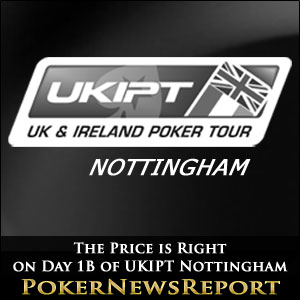 David Price finished top of the chip counts after Day 1B of the £500,000 guaranteed UKIPT Nottingham Main Event, which potentially could have a massive overlay.

There was a much improved turn out for Day 1B of the UKIPT Nottingham Main Event yesterday as the second opening flight saw 132 players pony up the £1,100 buy-in or qualify online for a seat in this prestigious and unique 6-Max tournament.

At the close of play, David Price bagged up 156,600 chips to head the Day 1B leaderboard, after a massive last-level hand in which his Kings held over an opponent´s pocket Jacks. However, he is currently in second place overall due to Mitch Johnson closing Day 1A with 171,500 chips.

Nitsche Flushed Out but Good Day for Former Champs

Day 1B of the UKIPT Nottingham had its fair share of “Stars” attending the event – with mixed fortunes. Dominik Nitsche was one of the bigger names to enter the tournament and fail to make it through to Day 2 after losing a third of his chip stack in the first level of the day to UKIPT Galway Champion Alan Gold´s rivered Flush, and then being eliminated from the tournament by DTD October Deepstack winner Jim Moult Q♣ 7♣ > K♠ Q♥ when Moult also completed his Flush draw.

Fifty-four players (of the 132 that entered Day 1B) survived the eight levels of play and will return on Saturday for Day 2. Those with the best chance of still being around when the UKIPT Nottingham Main Event is concluded on Monday include:

What About the Overlay?

With only 193 players having entered so far – and one more opening flight to go – there is a genuine possibility that there will be some additional value for the players who cash in the £500,000 guaranteed tournament. Dusk Till Dawn´s head honcho – Rob Yong – was all over Twitter last night asking players to support the event and made this appeal on the Blonde Poker forum:

We need 307 players tomorrow to hit the UKIPT Six Max £500k GTE. Numpty [Rob Yong´s dog] and me are ready to deal if necessary. It was my idea to put this huge prizepool up for a Six Max so all support appreciated!

Every single player that turns up before 4.30pm will get in with a full 20k stack and 60 min clock. Even at level 5 you get 66bb’s so plenty of play. Have organised extra tables just in case we need them.

While Day 1B of the UKIPT Nottingham Main Event was ongoing, the UKIPT High Rollers reached its climax. After four eliminations from the seven-handed final table, a three-way deal was agreed between Jonathan Spinks, Chris Brammer and Mickey Petersen to chop the pot (based on their relative chip stacks at the time) and leave £5,000 for the winner.

Petersen bust out in third after being coolered AQ > AK by Jonathan Spinks – and Spinks used his superior chip stack to good advantage to wrap up the heads-up against Chris Brammer quickly.