Three of the original “Hendon Mobsters” have re-united to start a UK-focused poker league, supported by Grosvenor Casinos – where the Mob´s story first began. 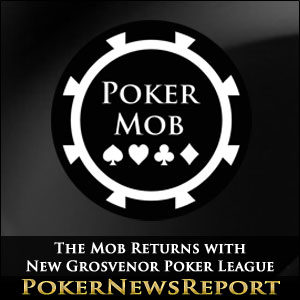 Three of the original “Hendon Mobsters” have re-united to start a UK-focused poker league, supported by Grosvenor Casinos – where the Mob´s story first began.

According to urban myth, Barny Boatman, Ross Boatman, Joe Beevers and Ram Vaswani collectively acquired the name “The Hendon Mob” in the mid 1990`s when the four players would arrive together to play poker at the cash tables of the Victoria Grosvenor Casino in London.

Vicky Coren – now a PokerStars-sponsored professional – first used the “Hendon Mob” name in print in 2000 when she wrote an article on the four players for London´s Evening Standard newspaper. The name stuck and, when the players launched a web site tracking worldwide live poker results, it was naturally called “The Hendon Mob Database”.

In July 2013, the Hendon Mob database was sold to the Global Poker Index, and the individual members of the mob temporarily got involved in their own pursuits; but now three of the four original “Hendon Mobsters” have re-united to start a new poker league under the name “The Poker Mob” in partnership with Grosvenor Casinos.

The “Poker Mob” is Launched

Barny Boatman, Ross Boatman and Joe Beevers officially launched The Poker Mob website yesterday, with a brand new poker forum and details of events in the first online Poker Mob League – which will run for eight weeks from Tuesday April 1st @ 8.00pm on grosvenorcasinos.com (a skin on the iPoker network).

Each of the eight weekly tournaments will have a buy-in of £11.00, and the highest points scorer over the eight weeks will win a £750.00 package to the GukPT Event of their choice. The next 50 highest-placed players in the league will compete in a play-off for a second £750.00 GukPT package, and each of the weekly tournaments will feature bounties on the three “mobsters”.

The schedule of events for the first Poker Mob league is:

The Poker Mob on Tour

The Poker Mob will also be representing Grosvenor Casinos at GukPT events throughout the year (Joe Beevers enjoyed a deep run in the recent GukPT Manchester Main Event), with the next leg of the tour taking place at the Grosvenor Casino in Edinburgh from 2nd-6th April.

Unfortunately Joe Beevers and the Boatman brothers are age-excluded (by a mile!) from playing in the Grosvenor Casinos Student Poker Championships the following week, but will return in May to play in the Main Events in Brighton and Walsall before heading off to Las Vegas to represent Grosvenor Casinos at the World Series of Poker.

What Happened to Ram?

The fourth member of the original mob – Ram Vaswani – is apparently alive and well and, according to Joe Beevers, “posing as an Essex boy in a future series of I´m a Celebrity – Get Me Out of Here”. Ram is expected to contribute to the Poker Mob web site in the future, but at present is fully committed elsewhere.