The Mediterranean Poker Tour Takes to the Seas

A new Mediterranean Poker Tour has been launched with a difference – the events will be played on a cruise liner rather than in a land-based casino. 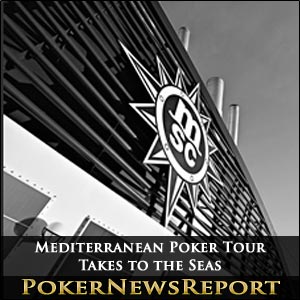 A new Mediterranean Poker Tour has been launched with a difference – the events will be played on a cruise liner rather than in a land-based casino.

When the first Mediterranean Poker Tour took place in May 2008 at the Casino di Venezia in Malta, the Main Event had a buy-in of €1,000 and attracted just 42 players. The winner, Italian Cesare Florio, took away a first prize of €14,000 for his three days work and the event was never played again. Until now!

This time however, the venue for the Mediterranean Poker Tour is not a land-based casino, but the luxurious MSC Fantasia – described by cruisecritic.com as “one of the most beautiful mainstream ships we’ve cruised on in the last few years” – and entry to all the poker tournaments is included in the price of the cruise.

The “Tour” starts on November 7th from Genoa (free bus transfers from the much more accessible Nice airport are available on request) and travels through Ajaccio (Corsica), Barcelona and Majorca before returning to Genoa on November 11th.

Throughout the four days, the Mediterranean Poker Tour will consist of a Main Event, a Side Event and a Shoot-Out Tournament, with free Sit n Go games catering for those who are eliminated at an early stage.

How to Get Involved

There are no qualifiers or satellites for the Mediterranean Poker Tour Main Event – the cost of the cruise (€549.00) includes the buy-in to all the poker events. For your money you will also get a cabin with a balcony, all your food, drinks with meals and pre-paid port taxes. Children under 18 travel free (provided they share a parent´s cabin) but are not allowed to participate in any of the poker tournaments.

Tournament entries are limited to 250 per event (because of the size of the poker room). Incidentally, the MSC Fantasia has hosted one notable poker tournament previously – The AssoGold Poker Elite Championship in March 2010. An Italian won that event also (for the record, a guy named Francesco Ninno) so, if you believe that French and Italians are easy to beat at the tables, you should be heading to Genoa in November for the Mediterranean Poker Tour.