The Kaiser Rules at EPT Tallinn

Ronny Kaiser leads the PokerStars sponsored EPT Main Event in Tallinn, Estonia, after an astonishing day in which one of the strongest EPT line-ups ever battled. 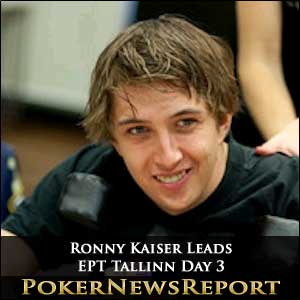 Swiss international poker player, Ronny Kaiser, leads the PokerStars sponsored European Poker Tour Main Event in Tallinn, Estonia, after an astonishing day in which one of the strongest EPT line-ups ever battled it out for the first prize of €275,000.

Ronny takes a massive chip advantage into Day 4 (of 5) after hitting a very fortunate straight to crack Liutauras Armanavicius´ pocket aces and send the Lithuanian to the rail.

63 survivors from Day 2 started the day hoping to capture one of the top forty spots and a guaranteed cash. Only 24 survived the day, which plays down tonight to the final table, and amongst those we lost were previous day chip leaders Makisim Kolosov and Nikolas Liakos, WSOP gold bracelet winner Joe Ebanks and last lady standing Irene Baroni. Gone also are Ireland´s John O´Shea and England´s EPT winner, Roberto Romanello.

Fans of domestic talent will be delighted to see “Big Mick” Graydon amongst the leaders along with fellow qualifier Stuart Fox, while professional UK poker player, Praz Bansi, had a successful afternoon to remain competitive – doubling up with Jacks against AK before slipping back a little in the later session. We send our support to all three players for when play recommences later today.

The shortest-stacked player going into Day 2 was Dutch player Johan van Til, and yesterday he had managed to convert his last five big blinds into 199,000 chips. Well, on Day 3 he surpassed his amazing feat by building that stack into 598,000, which only goes to show that you should never give up when your chips are down.

The value of qualifying for the European Poker Tour via [geolink href=”https://www.pokernewsreport.com/pokerstars”]PokerStars qualifiers[/geolink] has always been acknowledged as the best way to enter the EPT events, and above we noted that both Michael Graydon and Stuart Fox qualified for this event through online qualifiers. However, the story of the day revolves around Finnish player Petri Vuolle, who started the qualifying process with victory in a €2.00 sub-satellite. Going into day 4, he is assured of collecting at least €7,000 – that is some ROI!