The Hendon Mob – one of the UK´s most established poker “institutions” – has officially disassociated themselves with Full Tilt Poker. 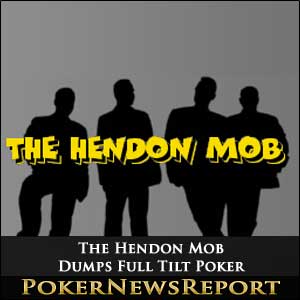 The Hendon Mob – one of the UK´s most established poker “institutions” – has officially disassociated themselves with Full Tilt Poker.

Members of the Hendon Mob were fantastic ambassadors for Full Tilt Poker, and used the income from a Full Tilt Poker sponsorship package signed in May 2006 to develop the world´s most comprehensive database of live poker tournament results.

In a statement at the end of June in response to why Full Tilt Poker banners were still appearing on their site, The Hendon Mob stated that they were “shocked and dismayed” at the suspension of Full Tilt Poker´s operating license but could “not see how it would help a single player right now were we to seek to deny our association with FTP or take any action that would add to their current problems.”

The End of the Relationship

However, earlier today, the founding members of the “Mob” released a statement on their web site announcing their decision to end their exclusive relationship with Full Tilt Poker due to financial reasons and to seek sources of income from elsewhere. The full text of the statement reads as follows:-

From today you will see some changes on the Hendon Mob website.
Like everyone else in poker we have taken a close interest in the development of recent months and we are saddened by the problems that continue to beset Full Tilt Poker.

The Hendon Mob were the first European players to sign up with FTP and this site has been a major affiliate. In the past five years we have made many good friends amongst the Full Tilt staff, Red Pros and of course the growing Hendon Mob community who played with us on the site and supported our league. For all their sakes, and for the wider poker community, we would be delighted to see positive developments in the weeks and months ahead.

We are well aware that a great deal of players including many who signed through The Hendon Mob still have money on FTP, as well as steps tickets, player points etc. going forward, and in any scenario where Full Tilt Poker resumes trading, we will as an affiliate continue to look out for the interests of our players and to try to achieve the best possible outcome regarding their funds. We do not take the loyalty of our community for granted.

The Hendon Mob employs a sizable staff of full and part time people who are dedicated to maintaining and improving the database, the forum and everything else that the poker community expects from our website. We are currently running at a substantial loss and this is not sustainable in the long term.

We have therefore chosen, as well as ceasing to be Full Tilt Pros, to end The Hendon Mob.com’s exclusive relationship with Full Tilt Poker. This frees us for new opportunities, both as a website and as players and we look forward to an exciting future that we hope you will all be a part of.

We wish the Hendon Mob and all the staff who work on the site the best of luck in obtaining a new sponsorship deal to continue the excellent work they do – not only with maintaining the player database, but by keeping a lively forum running and for the excellent selection of tips and articles they compile.