The Greatest Online Show on Earth Starts on Sunday

The 2014 PokerStars World Championship of Online Poker gets underway on Sunday, with a minimum of $40 million to be won over the next three weeks. 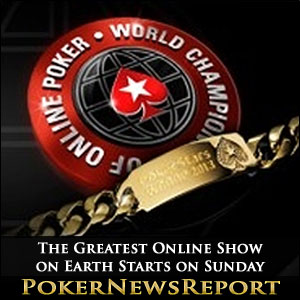 The 2014 PokerStars World Championship of Online Poker gets underway on Sunday, with a minimum of $40 million to be won over the next three weeks.

This coming Sunday sees the return of the PokerStars World Championship of Online Poker (WCOOP) – the most popular online poker series on the planet which will attract tens of thousands of players to the virtual felt with the promise of millions of dollars in prize money.

The series consists of sixty-six tournaments over twenty-two days that have buy-ins ranging from $109.00 to $10,300. The three weeks of action culminate on Sunday 27th September with the $5,200 buy-in WCOOP Main Event which alone has a guaranteed prize pool of $10 million!

There are three valuable tournaments being played on each day of the WCOOP Series, and Sunday´s three “Kick-Off” events have combined guarantees of almost $3 million. The action gets underway at 8:00am (ET) with a $109.00 buy-in NL Hold´em freezeout, continues at 11:00 (ET) with the $750,000 guaranteed “Sunday Warm-Up”, and concludes with a special edition of the “Sunday Million” at 1430 (ET) which has a $1.5 million guarantee.

Throughout the following twenty-one days, a variety of games in a variety of disciplines will test the skills of every online poker player. The biggest prizes are not just confined to the weekend action – a “Super Tuesday” tournament on each of the three weeks of the WCOOP guarantees $1 million in prize money – so you can expect to find some of the biggest names in poker competing at the tables every day of the week.

Not a Big Name in Poker? Check Out the Satellite Program

Not many online poker players will have the bankrolls to pick and choose which of the 2014 WCOOP events they can directly buy into; and PokerStars have compiled a comprehensive satellite program for each of the WCOOP tournaments to allow those with a limited bankroll (but sufficient skill) to qualify for the feature events for a fraction of the buy-in.

Multitable and Sit n Go satellites are available 24/7 throughout the 2014 WCOOP Series – with many having buy-ins using Frequent Player Points (FPPs). A not-to-be-missed event is the freeroll “Deadline” sub-satellite on Sunday 28th September (12:00noon ET) which will award the top ten finishers with a seat in the $82.00 buy-in Main Event qualifier at 13:30 ET. The $82.00 buy-in qualifier has got 25 seats guaranteed into the Main Event, so you could be playing for your share of $10 million for free!

Warning for Playing WCOOP on a Mobile

Players who want to play the WCOOP events on a mobile device should note that fifteen of the WCOOP tournaments are not supported by PokerStars mobile client. The tournaments mostly include draw games such as Stud, Razz and Badugi, but players hoping to get involved in either of the 5 Card Omaha tournaments will also be disappointed.

Being unable to host games of Stud and Razz on the PokerStars mobile client also excludes players from any of the mixed game tournaments (HORSE and 8-Game Mix) and also the NL Hold´em/PL Omaha mixed poker event. PokerStars´ dedicated WCOOP web page gives a complete rundown of which events can be played on a mobile and those which you will have to stay at home to play.

Through the 2014 WCOOP Series, PokerStars is once again hosting a Player of the Series leaderboard competition for players who consistently achieve success over the next three weeks. Points are awarded to every player who cashes in the sixty-six WCOOP tournaments, with the top five players at the end of the Series winning these valuable prizes:

Competition will be hot to win the leaderboard competition, and you can keep up-to-date with the leaderboard standings on PokerStars´ Player of the Series web page, or by following @PokerNewsReport on Twitter.