The Force is With Leif For WSOP Event #3 Title

American Leif Force has picked up his first gold bracelet for winning event #3 at the World Series of Poker (WSOP) in Las Vegas for an impressive $207,708. 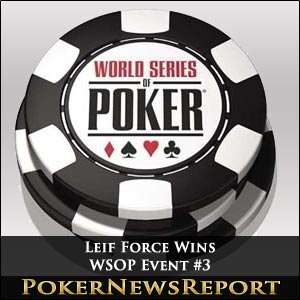 American Leif Force has picked up his first gold bracelet for winning event #3 at the World Series of Poker (WSOP) in Las Vegas for an impressive $207,708.

Many poker aficionados will remember Force from the 2006 WSOP main event, when he sported his ‘Jungle Boy’ look – complete with dreadlocks – on the way to finishing in 11th place for $1,154,527.

But now the Florida pro has collected a WSOP title after winning nine successive matches in the inaugural $3,000 buy-in Heads-Up No-Limit Hold’em/Pot-Limit Omaha event – the last of which was against fellow American Jason Koon.

The 29-year-old – who hails from Tallahassee – topped a 317-player line-up on his way to the top prize, beating quality players such as George Lind in the last 16, Andy Frankenberger in the quarter-finals, Julian Powell in the semis and ultimately Vegas’ Koon to clinch the crown.

The swift final heads-up clash in the Amazon Room of the Rio All-Suite Hotel & Casino saw Force gain an early advantage, particularly during the opening Pot-Limit Omaha round, only for Koon to fight back once the No-Limit Hold’em round arrived.

In fact, Koon took down a crucial all-in pot after Force, on the button, had made a minimum raise to 60,000 that saw the eventual runner-up re-raise to 160,000. Force replied by shoving all-in and Koon made the call.

Koon showed a pair of jacks to be ahead of the Q♣ 9♥ placed on the felt by Force. The flop came 10♦ J♦ 6♥ to give Koon trips, while the 9♦ turn and 9♣ river filled him up for a full house that ensured he took the lead heading into a round of Pot-Limit Omaha.

However, just like the earlier Omaha round, the eventual champ started to build up his chip stack once again – taking down several vital all-in pots. Then, following two double-ups, Force was able to complete the job with the last hand of the event during level 4.

While the 10♣ turn improved Koon’s two pair to a flush draw, it also handed Force a backdoor flush draw as well as a gutshot straight draw. But the Q♣ river gave Force the nut flush and the title to leave runner-up Koon with $128,660 for his troubles.

The semi-finals then saw Force defeat Powell and Koon defeat Naydenov to set up the final clash.