Now that the WSOP has concluded, tournaments based on the East Coast are poised to take center stage. 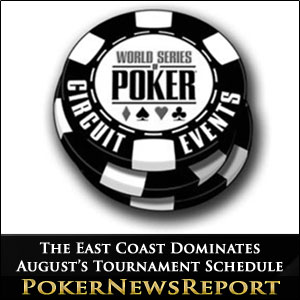 Now that the WSOP has concluded, tournaments based on the East Coast are poised to take center stage.

Poker pros used to view the East Coast as a sort of training ground. High stakes cash games rarely got off, big tournament series were largely unheard of, and the competition was generally much softer than what one would find in Las Vegas. If Vegas offered the stuff poker dreams were made of, the East Coast was a 20-minute nap by comparison.

But over the past two decades or so, things have changed. A slew of high profile casinos have opened up, including Foxwoods, Mohegan Sun, the Borgata and Parx – many of them featuring poker rooms that rival ones found in Vegas. And although there is no single tournament series on the East Coast as big as the WSOP, it now offers its fair share of prestigious events, as made evident by this August’s schedule.

The most noteworthy series of events will be happening at Foxwoods. On August 8th, the Connecticut casino will host the first 2013-14 WSOP Circuit Events. It also marks the only time this year that the circuit will stop on the East Coast. Twelve events are scheduled, with the Main Event occurring over three days from August 17th – 19th. Events feature buy-ins as law as $250 and as high as $1,675, with several events counting towards point standings.

Also of note is Parx Casino’s Big Stax III series. Kicking off on August 1st, the series will feature three deep stack tournaments. For $300 + $30 participants in the first event will receive a whopping 30,000 chips, and 45-minute blind levels – which are increased to 90 minutes on Day 2 and Day 3. The tournament is tailor made for players who enjoy the deep structure of high buy-in events, but can’t necessary afford to drop thousands of dollars on one tournament. The other events will feature $500 and $1,000 buy-ins and offer even larger starting chip counts.

Finally, the increasingly popular Sands Casino in Bethlehem, PA will be offering the Sands Deep Stack Extravaganza series. Beginning on August 16th, the series will feature 10 events, many of them bounty events. The Main Event will occur on August 24th, and features a $1,500 buy-in and $250k guaranteed prize pool. Satellites to the Main Event are currently running every Wednesday and Friday. And while you’re at the Sands, be sure to check out the only Big O cash game offered on the East Coast.

Yes, August will be a busy month for East Coast tournament junkies. And with the Borgata kicking off its Poker Open on September 3rd, the fun will continue on all the way until September 20th.

So whereas 20 years ago it was hard to find a tournament with a buy-in over $100, nowadays the biggest problem East Coast tournament players face is figuring out which series to play in.