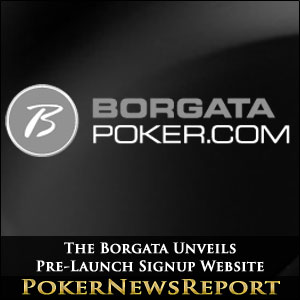 With the advent of regulated Internet gambling in New Jersey less than three weeks away, the Borgata has established an online presence for its online poker and casino offerings.

The Borgata was the first state to be awarded an iGaming permit by New Jersey’s Division of Gaming Enforcement (DGE), and is poised to become one of the biggest players in the state’s newly-christened market. It will launch its two online gambling sites under the BorgataPoker.com and BorgataCasino.com domain names.

The newly launched promotional site is little more than a signup form, where players can enter in their names and email addresses in exchange for information regarding the casino’s slots, poker and casino-style table offerings. Based on the information presented in the site, it appears that the Borgata is set to roll out a full array of games including Blackjack and Roulette. Whether or not more obscure games will be included into the mix is currently not known.

Borgata made their iGaming intentions abundantly clear when it was one of the first casinos to announce their online partner. That distinguished honor goes to bwin.party, owners of the World Poker Tour and creators of online poker’s former champion, PartyPoker.

Last week it was announced that the Amaya Gaming Group would be providing the platform for bwin.party’s online casino games in both New Jersey and in Europe.

Providers seeking to go live on November 26th must first participate in a five-day “soft launch” period, during which time selected players will be invited to try out the software and participate in real-money gambling activities. It is not currently known whether the Borgata has pre-selected its invitees already, or will choose them from the pool of players that sign up for their mailing list.

Other casinos that have initiated their online marketing campaigns include the GoldenNugget, which after moving its play-money site over to GoldenNugget.net, has paved the way for its real-money site to reside on its .com domain. The GoldenNugget is in the process of preselecting players for its trial launch.

The Tropicana also kicked off its pre-signups this week, and Betfair launched its “Lets Play NJ” website last month. Visitors to ucasino.com, home of Ultimate Casino in conjunction with the Trump Taj Mahal, are greeted with an email form and an invitation to sign-up for the November 21st launch event. It also offers players the chance to win cash prizes.

All this indicates that Atlantic City casinos are pumped up about the imminent launch of Internet Gaming in New Jersey, and rightfully so. Atlantic City’s revenues have gone down the tubes over the past seven years. Online gambling may just be the trigger the beat-up gambler’s haven needs to turn things around.