The Big One Poker Event Winner Guaranteed More Than $12 Million

The winner of the $1 million buy-in The Big One for One Drop poker tournament held at this summer’s WSOP is guaranteed at least $12 Million, 30 players already signed up.. 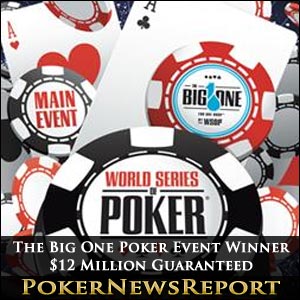 The winner of the $1 million buy-in The Big One for One Drop poker tournament that will be held at this summer’s World Series of Poker (WSOP) is guaranteed at least $12,266,668.20 (can’t forget the cents!), as well as a specially-designed platinum bracelet, after it was announced that 30 players have already signed up for the historic event.

The special event, which is certain to possess a prize pool of $26,666,670, will run from July 1 to 3 at the Rio All-Suite Hotel & Casino, with an additional eight players – including American eight-time WSOP bracelet winner Erik Seidel – now confirmed for the highest stakes poker game ever.

With just 18 places left to be filled, it will be interesting to see if any other big-name pros join the likes of Patrik Antonius, Gus Hansen and PokerStars Pros Daniel Negreanu, Jonathan Duhamel and Bertrand ‘ElkY’ Grospellier, as well as Johnny Chan, Tom ‘durrrr’ Dwan, Team Party Poker Pro Tony G and Dan Shak.

These latest additions to the tournament have certainly made Guy Laliberté – the Cirque Du Soleil founder and One Drop chairman – a very happy man as he aims to raise awareness “among individuals and communities on water-related issues”, as detailed in the charity’s plan of action.

One Drop Founder Guy Laliberté Blown Away By Generosity

Laliberté said: “It is an exciting moment and it is wonderful to see the poker community’s generosity, where organisations, players and fans are all coming together to support One Drop”.

The One Drop boss continued by adding that “everyone can get involved and everyone should be concerned” about water-related diseases throughout the world “because a child dies every 20 seconds”, although he did stress “that together we can beat the odds”.

He believes that this target can be reached, “whether entering the Big One for One Drop, becoming a poker ambassador, making a donation, or simply changing their water consumption habits”.

As you will see below, several seats at the massive tournament have been reserved as handouts and for the winner of a satellite run by Caesars Interactive Entertainment after the WSOP announced that they will be providing hopefuls with the chance to qualify for just $65.

Venues throughout the USA will stage live step-satellite events, culminating in a $25,300 buy-in Mega Satellite that will take place on Saturday, June 30, in the Vegas venue for the WSOP. That tournament will provide at least one seat at The Big One for One Drop, while additional seats will be added at one per every 40 entries in the Mega Satellite.

If you are interested in taking part in the Vegas event, a $50,000 deposit is needed to reserve a seat, with the complete buy-in expected two weeks in advance of the event start.

In case you are still unsure about One Drop’s aims, they are a public charity which develops innovative methods and activities that involves water in a “central role as a creative force in generating positive, sustainable change worldwide”.

The charity’s aims have a more specific goal, however, as they are “involved in raising awareness among individuals and communities on water-related issues to convince them of the need to mobilise for universal access to water and urges them to adopt sound habits for managing this precious resource for future generations”.

The Big One for One Drop Participants (confirmed)