The Big One for One Drop Poker Satellite Qualifiers Get Underway

The WSOP will stage their first satellite qualifier for the $1 million buy-in The Big One for One Drop poker tournament, aiming to begin their journey to Las Vegas for as little as $65. 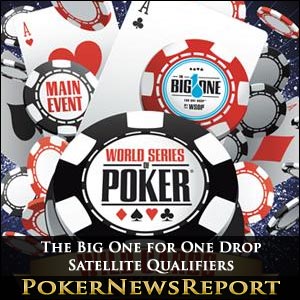 The World Series of Poker (WSOP) will stage their first satellite qualifier for the $1 million buy-in The Big One for One Drop poker tournament in Los Angeles today – with players aiming to make the event at the Rio All-Suite Hotel & Casino on July 1 able to begin their journey to Las Vegas for as little as $65.

Today’s Bicycle Casino event in California comes after a month that saw some players win free seats into the qualifier while others gained their place through a $150 buy-in step satellite, although hopefuls can stump up $500 to buy directly into the tournament, as all aim to earn a $25,300 seat for the Mega Satellite that will take place on Saturday, June 30, in Vegas.

Each fortunate qualifier will also have their airfare paid, as well as accommodation in the Nevada city – courtesy of Caesars Interactive Entertainment – for the mega satellite that guarantees at least one seat at The Big One for One Drop tournament, although the WSOP are promising to provide additional seats at one per every 40 entries.

Now, for all of you budding stars out there who fancy a shot at winning what will be the highest stakes poker game of all time, the WSOP have revealed details of 14 confirmed venues – including the Bicycle today – in the USA that will host live step satellite tournaments, with each guaranteeing a seat at the mega satellite that starts at 13:00 on the eve of the star-studded three-day event itself.

ESPN plan to broadcast the No-Limit Hold’em event which will see a specially-designed WSOP platinum bracelet awarded to the winner, as well as what is likely to be an eight-figure first prize, while an incredible 20% of the field – about double the typical level for a poker tournament – will also make the money.

Just $65 Can Earn Shot at Glory

Following on from today’s satellite in LA, 13 more step tournaments will be staged throughout the States, with more to be added soon, as each winner picks up a mega satellite seat.

Now, you might be wondering where these $65 qualifiers I mentioned previously come in. Well, all the above events are actually culminating tournaments, so players can still contact the venues to get details of when their step satellites take place – with those starting from as little as $65. See? There you are. Good luck.

Schedules and Much More Available

Schedules and other tournament details, including buy-in amounts, start times and any updates, can be found by visiting http://www.wsop.com/2012/thebigone/satellites.

Now, don’t forget that this tournament is being staged for a very good cause, with One Drop chairman Guy Laliberté – who also founded the Cirque du Soleil – introducing the event at last year’s WSOP with the aim of raising money for a project designed to provide easy access to clean water for impoverished countries.

The Big One for One Drop Qualifying Events Schedule