The Best Time to Play WCOOP Satellites is This Weekend

With many of the world´s best players over in Barcelona for the European Poker Tour, this is the weekend to play satellites for the forthcoming WCOOP. 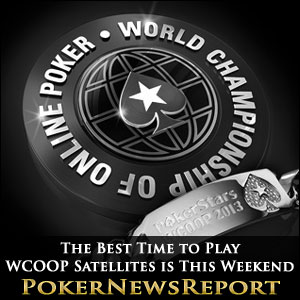 With many of the world´s best players over in Barcelona for the European Poker Tour, this is the weekend to play satellites for the forthcoming WCOOP.

EPT Barcelona players sitting in their Spanish hotel rooms this weekend, hoping to win some cheap entries into the World Championship of Online Poker (WCOOP – 8th to 29th September), will be disappointed to discover that unless they have connected their laptops, tablets or mobiles to a proxy server, they will be unable to compete in this weekends´ satellites for the WCOOP (and indeed, some of the earlier events).

Government greed regulation forced PokerStars into setting up a ring-fenced website for Spanish online players last year, and although there is still plenty of action on the Spanish site, players on PokerStars.es cannot compete in the WCOOP – and consequently the site is not hosting satellites to the events. Good news indeed for anybody trying to avoid the stiff opposition holed up in the Casino d´Barcelona.

Although “regular” satellites to all the WCOOP events are running day and night, there are a handful of Mega Satellites that you do not want to miss this coming weekend for the first of the major events.

Early risers on Sunday will be able to take advantage of a $40.00 buy-in turbo deadline satellite with 150 seats guaranteed to the opening event of the series. The satellite starts at 11.30am (GMT) with the target event getting under way just half an hour later (hence the name “Deadline Satellite”).

There are two mega-satellites running this weekend for Sunday´s WCOOP Event #2 – On Saturday at 15.00pm (GMT) PokerStars are hosting a $22.00 buy-in 6-Max qualifier with 100 seats guaranteed in the prize pool, and another “Deadline” turbo satellite with a buy-in of $82.00 will take place on Sunday at 14.30pm (GMT) with another 150 seats guaranteed to the target event – which again starts thirty minutes later.

PokerStars are putting on three mega-satellites to the opening day´s feature tournament – two on Saturday at 17.45pm (GMT) and 18.30pm (GMT) – both with an $11.00 buy-in and both offering 100 seats into the $1.5 million guaranteed feature event (the 17.45pm satellite is a turbo tournament in case you were wondering why there were two satellites scheduled so close to each other!). The Sunday “Deadline” satellite has an $82.00 buy-in and guarantees 250 seats into WCOOP #3 – this time starting an hour before the target tournament at 17.30pm (GMT).

Satellites for Later Tournaments and the WCOOP Main Event

Registration is already open for Deadline satellites taking place on Monday for WCOOP Events #4, #5 and #6, and there is also a $700.00 buy-in five-seat guaranteed satellite taking place on Sunday 8th September at 18.25pm (GMT) for the $8 million WCOOP Main Event.

Remember, the best time to play WCOOP satellites at PokerStars is this weekend!