The 44th Annual WSOP Is Underway

For the next seven weeks all eyes will be on the poker world as the 44th Annual WSOP takes center stage. 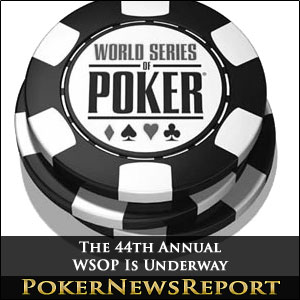 For the next seven weeks all eyes will be on the poker world as the 44th Annual WSOP takes center stage.

Poker players rejoice – the wait is finally over. Wednesday, May 29th marked the kick-off of the hotly anticipated 2013 WSOP. This year’s iteration of the annual event will feature a total of 62 bracelet events, and run from now until July 15th, where a lucky group of players will be designated this year’s October 9.

The WSOP committee has decided to throw a few curveballs our way this year, some of which are destined to change the way we perceive live poker forever. Perhaps the biggest change is that poker fans will be able to view hole card information in real time. Thanks to something called RFID (radio-frequency identification) technology, each card has been installed with a microchip that can apparently read a card’s rank and suit. This information will be relayed to fans during live streams, and used by analysts and announcers to break down the action. RFID tech has already been used in this year’s WSOP Circuit events and some European events with much success.

Additionally, when two final tables are going on simultaneously, fans will be able to watch both. The secondary tables will not feature announcers, but will pick up audio from the tournament director’s microphone. For these events, which will generally be of the non-flop variety, hole cards will not be on display.

A new price point has been introduced this year: $111,111. While it isn’t as big as the $1 million price point of last year’s Big One for One Drop, the One Drop High Roller should draw significantly more entries, and may boast an even bigger prize pool. $3,333 of each entry will be donated to the WSOP’s official charity, the aptly named One Drop. Less ambitious players will also be able to contribute to charitable causes by playing in the Little One for One Drop, which is a $1,111 buy-in tournament with, as you may have guessed, $111 going to charity.

Also new this year is the Millionaire Maker. Featuring a guaranteed first place prize of at least $1 million dollars, this $1,500 buy-in event is poised to attract one of the biggest entry pools in live tournament history. The tournament starts on June 1st, at 11:00 A.M, but players who bust are allowed to enter the second flight, which begins at 5:00 P.M the same day. If anything, the Millionaire Maker will prove that you don’t have to be rich to get rich.

Others aspects of this year’s WSOP have remained the same. As usual, action kicked off with the $500 Casino Employees Event. While last year’s Event #1 drew an impressive 732 players, this year’s topped that by a significant margin, as 860 hard-working poker fans tried their luck playing one of the games they normally deal. The other day 1 event (Event #2) is a 4-day $5,000 buy-in eight-handed No-Limit Hold’em event.

And of course, the Main Event will feature televised coverage, a $10,000 buy-in, and the crowning of a new champion. If it isn’t broke, why fix it? Main Event coverage will begin on July 6th and run through the 15th. This year marks the 10-year anniversary of Chris Moneymaker’s historic win, and the unofficial beginning of the poker boom.

Most events will be streamed on ESPN3 and WSOP.com, so there is no excuse to miss the action. Now, let’s shuffle up and deal.