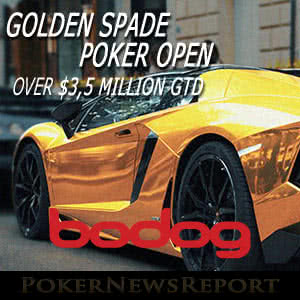 The Golden Spade Poker Open is returning for its 5th year at [geolink href=”https://www.pokernewsreport.com/bodog-poker”]Bodog[/geolink], with the first even starting on October 11th, 2017. It has been one of the most popular tournament series on any poker network, including rival networks like WPN and Chico.

The GSPO runs for several weeks, with tournament buyins ranging from as little as $16.50 to as high as $450. The latter buyin will cover the cost to play in the Main Event, which will guarantee at least $300,000 in total prizes regardless of how many players enter.

The popular poker tournament series will be the last of the year for Bodog and its US-facing poker skin over at [geolink href=”http://pokernewsreport.com/ignition-poker”]Ignition Poker[/geolink]. The series itself attracts thousands of players from tons of different skill levels, with many grinders earning their GSPO tournament tickets via satellites. These satellites can get you in to certain tournaments for as little as $1 to $5.50.

All in all, the Golden Spade Poker Open will be covering over $3 million in guarantees for the 3-week series. This figure is up $500,000 from 2016’s last GSPO! There is little doubt that this year’s series will shatter that $3 million figure, as this particular event brings in a lot of action due to it being the last major poker series on the network this year and because the fall is a popular time for players to get online.

More Background on Bodog and Ignition Poker and Casino

Bodog represents the international arm of the PaiWangLuo Network, which offers poker to players worldwide, with its largest reach being in Canada and most of Latin America. They have been around for well over a decade and have some of the best proprietary poker software in the industry today.

Ignition Poker and Casino represents the USA side of the aforementioned PaiWangLuo Network, which ONLY ACCEPTS players from the United States (excluding states with legal online poker such as New Jersey, Delaware and Nevada). This is one of the [geolink href=”https://www.pokernewsreport.com/us-poker-sites”]most popular US poker sites[/geolink] and has risen in popularity due to its guaranteed tournaments, fishy cash games and anonymous tables.

Both of these sites pool their traffic together when the Golden Spade Poker Open and similar tournament series run at Bodog and Ignition. The result is a wide variety of players coming together from many different countries and accommodating a variety of skill levels. Since Bodog opened its doors to more countries and Ignition subsequently opened up its doors to Australian players, the network has flourished greatly in 2017 and has even higher hopes for 2018.