A modest entry of 96 paid the £1,070 buy-in on Day 1A of the Grosvenor UK Poker Tour Main Event in Blackpool yesterday, but the event was not short on quality. 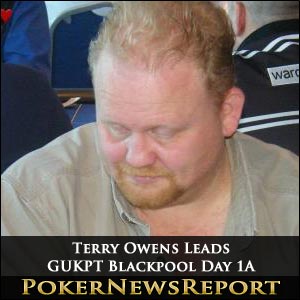 A modest entry of 96 paid the £1,070 buy-in on Day 1A of the Grosvenor UK Poker Tour Main Event at the Sandcastle Casino in Blackpool yesterday, but the event was not short on quality.

Heading the list of runners was three times GUKPT Main Event winner Julian Thew, and he was joined by other tour regulars Richard Trigg, Peter Wigglesworth and Richard Sinclair.

No Fourth Time Lucky for Thew

Unfortunately, Julian Thew busted out mid-way through the day when he ran his pocket Tens into the pocket Kings of John beck, but Messers Wigglesworth, Sinclair and Trigg will have a day off to enjoy the Blackpool illuminations before returning on Saturday when survivors from the two Day 1s combine. All three are comfortably stacked, but may have to go some to catch up with runaway leader Terry Owens.

Terry Owens – who is no stranger to GUKPT success himself – was the only player on Day 1A to crack the 200,000 chips barrier, and only one of three players to end the day on more than 100,000 chips. His day started slowly, but improved after the dinner break when he forced George Hilton (set of Fives) out of a substantial pot with an overpair, and he then cracked the Aces of Greg Howard with two pairs – Queens and Jacks. With his big pile of chips he was able to take advantage of the tactics of the shove-or-fold short-stacked players, and returns on Saturday with 205,000 chips.

Jack Ellwood is currently in second place with 143,000 chips. He held the lead for most of the day, despite having his set of Tens busted by Alan McLean´s set of Kings, but chipped up with a big pot win against Ash Desai towards the close of play, when his pocket Jacks held against Desai´s AK. Steve Higton will hoping he can work the magic again on Saturday , after hitting a Royal Flush to best Willie Wicher´s Aces full of Queens and then chipping up against Trevor Lawson to run his stack up to four times its starting size in the first six levels.

Steve Higton slipped back to under 40,000 chips by the end of the day, but will join 26 other players who safety negotiated Day 1A of the GUKPT Blackpool Main Event. Day 1B starts today at noon and a slightly bigger field is anticipated in pursuit of penultimate Tour title before the season finale in London at the end of the month.