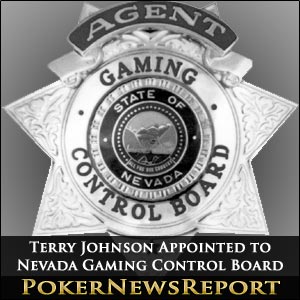 Johnson is the director of the state Department of Business and Industry. That position is responsible for overseeing 635 employees encompassing 14 different agencies that have a combined operating budget of $119 million. Johnson’s resume includes a stint as state labor commissioner, deputy director of the state Department of Employment, Training and Rehabilitation from 2004-07, and assistant director of the Clark County District Attorney’s Office from 2007-11. Johnson obtained a bachelor’s degree in political science from the University of Nevada – Las Vegas and also earned a law degree from UNLV’s law school.

Terry’s strategic leadership and innovative thinking has helped him effectively operate one of the more complex departments in state government, Gov. Sandoval stated to the LVRJ. I have no doubt that his regulatory experience and public service background will serve as a strong foundation for this next step.

Lipparelli stepped down from his post as control board chairman in September–a role he filled since 2009. His term was set to expire in December, but he resigned a few months early to give the board’s newest member a chance to get acclimated to the position prior to the legislative session that starts in February. Sandoval will select a new chairman among the board’s other two sitting members, Shawn R. Reid and A. G. Burnett.

Johnson will ride out the final two months of Lipparelli’s term and will begin his four-year appointed term in January. The job of overseeing and regulating the Silver State’s gaming industry pays a salary of $125,741 a year. And with Nevada going full steam ahead with scrutinizing license applications for the country’s first legal online poker regime, Johnson can expect to be quite busy in his new position. Nevada gaming officials have approved the applications of roughly a dozen online poker licensees thus far and have another two dozen or so to investigate. The state is preparing to have the first site operating and available to Nevada residents and tourists by December or early 2013.