Canadian poker pro Terrence ‘Unassigned’ Chan is regularly ribbed by friends for ‘not being Johnny Chan’. 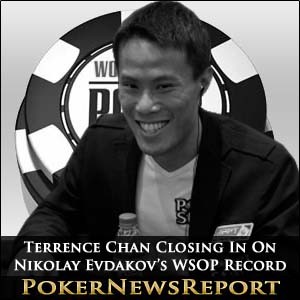 Canadian poker pro Terrence ‘Unassigned’ Chan is regularly ribbed by friends for ‘not being Johnny Chan’.

However, while the Vancouver native has a long way to go to match the 10 World Series of Poker bracelets owned by the other Chan, Terrence is closing in on one of the most desirable WSOP records at the Rio All-Suite Hotel & Casino in Las Vegas.

Terrence – who is widely regarded as among the world’s leading Limit Hold’em players without a gold bracelet – is on pace to surpass the late Nikolay Evdakov’s mark for most cashes in a solitary series.

The Russian, who unfortunately passed away this February, cashed 10 times during the 2008 WSOP and, although a few players have come close to breaking his record, it still remains unbeaten.

However, former PokerStars employee Chan picked up his eighth cash with seventh place for $17,107 in the $2,500 buy-in Limit Hold’em Six-Handed event #40 on Saturday – and is now just two away from matching Evdakov’s record and three from setting a new high mark for a single series.

Now well past the midway stage of this WSOP, MMA (mixed martial arts) fighter Chan’s chances of matching – and maybe even breaking – the all-time record remain high as more than a dozen events have still to kick off.

While Terrence is probably best known for his fabulous performances in the 2009 PokerStars SCOOP (Spring Championship of Online Poker) series, when he won two six-max limit hold’em events simultaneously – the $530 medium buy-in for $51,300 after outlasting a field of 540 and the $5,200 high buy-in for $134,887.50 by besting an elite 99-player field – he might well finally shake off that slightly annoying tag he has been labelled with.

Having now cashed in a total of 26 WSOP events for $651,301, the self-taught pro who took up the game in 1999 is also smashing California-based Johnny in this summer’s series after taking an 8-0 lead in the 2012 ‘Chan Cash’ chase.

In fact, if Terrence keeps up his current charge, it won’t be long before he passes two-time main event champion Johnny’s 44 WSOP cashes – although he still has a very long way to go before he overtakes the Chinese-born pro’s $4,322,593 total earnings from the festival.

However, there’s one record that is unlikely to be beaten for a long, long time – and one which is held by Oklahoma’s legendary Berry ‘Numbers’ Johnston.

Many poker fans have asked us at Poker News Report who holds the record for cashing in no less than one gold bracelet event in successive series. Well, as you might have noticed, it’s 76-year-old Johnston – who has made the money at least once in every WSOP since 1982!

The Poker Hall of Famer – who won the 1986 main event for $570,000 – doesn’t have too much to worry about right now, though, as the nearest challenger to his record is eight-time WSOP champion Erik Seidel.

But the 52-year-old New Yorker – who is now based in Vegas – is ‘only’ at 21 successive years, so won’t be breaking that record any time soon.

Certainly, Terrence Chan – who has accumulated $75,378 in total earnings so far at this WSOP – can’t hope to match Johnston as he stands at just eight consecutive years in the money, although maybe we’ll be talking about his incredible run some time about 2035 or so, depending on what Seidel and Johnston manage during that time.

Meanwhile, below is a table of Chan’s series so far…