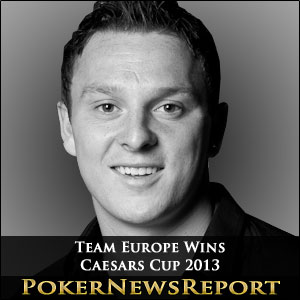 The format consisted of a best of three series in which the first couple matches saw two team members share a stack of chips and compete against the combined stack of two players from another team. Following team match play, a heads-up confrontation would declare a winner, if necessary.

Rettenmaier and Gruissem were pitted against captain Joe Hachem and Richard Yong of Team Asia Pacific in the opening match. Europe took the opener when their Q-J suited in diamonds managed to flop a flush versus the heart-suited 9-6 of Team APAC. But the Asia Pacific squad bounced back to win the second match as Jackie Glazier and Shane Warne were dealt pocket aces and Trickett and Holden shoved all-in with pocket 5’s.

The rubber match was won when Nitsche’s pocket Q-6 of spades pulled out a flush on the river against the diamond-suited Q-J of Team APAC’s Jeff Lisandro. This was the first year that Asia Pacific fielded a team for the Caesars Cup in the third time the event was staged. Team Europe took the first title in 2009, while America’s Phil Hellmuth-led squad captured the cup in 2011.

Antonio Esfandiari and Daniel Negreanu teamed up to represent the Americas in the first match because they were still alive in the WSOP APAC Main Event and had to scurry off to their respective tables in that competition. Negreanu called Nitsche’s all-in on the final hand and turned over pocket 7’s. Nitsche showed suited Q-8 and Europe won the first match when the board of J-J-8-K-9 paired up the eights.

The second match saw the two Phils, Ivey and Hellmuth, take on Europe’s Gruissem and Rettenmaier. With 22 WSOP titles between them, Hellmuth and Ivey dominated their rivals. The Americans doubled up with aces versus sixes and then completed the victory on the next hand when a Queen on the flop paired up with their Q-8 in the hole.

The 2012 WSOP Main Event champion, Greg Merson, was pitted against Holden for the 2013 Caesars Cup championship. Holden’s pocket 10’s materialized into a full house and bested the Maryland native’s Q-J in the match’s key hand. The very next hand saw Holden with another pocket pair, this time 8’s, which managed to hold up against Merson’s all-in on Q-4 offsuit.

The Europeans now have the prestige of having won two Caesars Cup titles in three tries. Details have not been announced for the next meeting, but the battles have been fought every other year since 2009, so look for the Caesars Cup competition to be held again in 2015.