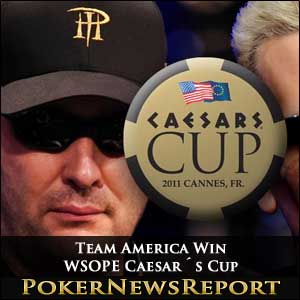 In a special “made-for-TV” event, Phil Hellmuth lead his team to victory 3-1 against a depleted European team captained by Bertrand “ElkY” Grospelier – Hellmuth himself winning the rubber when gave Team America an unassailable lead in the event.

The unusual format of the Caesar´s Cup needs a fair amount of explanation. At the beginning of every leg the players (or teams of players) are given 100,000 starting chips, but the blinds continue to rise through the program of events at 10 minute stages. Therefore, when Jake Cody and Tony G sat down in their first match against Jason Mercier and Ben Lamb, blinds were 100/200, but by the time Hellmuth lifted the Caesar´s Cup on behalf of Team America, they had risen to 3,000/6,000. Some people liked the format, others felt that the blinds should be reset at the beginning of each leg, but the rules had been made (for the benefit of TV) so everybody just got on with it.

It was not so much the blind structure that was confusing to many watching the event being broadcast around the world, but the structure of the games. The first leg of the day was the “alternate action” format, where the decision maker swapped with every street of action. For example, in the first hand of the day, Jake Cody opened the pre-flop betting with a bet of 5,000. Jason Mercier called, and after the flop it was Ben Lamb´s turn to act for Team America. He checked, but Tony G on his turn to act for Team Europe raised 7,000 chips. Lamb called and the rest of the cards were checked through by the four team players – Team America revealing trip Aces to win the first hand.

The trip Aces were a sign of things to come for Tony G and Jake Cody, as Team America first crippled them with pocket Aces against a missed flush draw, and then won the first leg in a straightforward Q♥ 9♠ versus 10♥ 8♥ race. Tony G and Jake Cody had not played badly, but they possibly had the more pressing matter of the WSOPE Main Event on their minds – the feature tournament in which they were both still in contention. Gus Hansen and Max Lykov were next up to the plate against Phil Hellmuth and Daniel Negreanu, with Hansen talking over the role of chief antagonist and telling Hellmuth “It’s not about winning the most hands. It’s about minimizing the losses. That’s why we’re the champions.”

Europe Draw Level and Then Fall Back Behind

Hansen´s words came back to haunt him later in the day, but not before he had crippled Daniel Negreanu with a full house of Aces over Fives and Lykov had bluffed Hellmuth out of a massive pot – setting up a Team Europe victory and levelling the score at one leg apiece. Unfortunately for the European team, Bertrand Grospelier could not keep the momentum going in a one player –v- one player heads-up against dual WSOP Main Event winner Johnny Chan. The match was a classic encounter, with fortunes swinging one way and then the other but, as the blinds continued to rise, eventually something was going to explode. Ultimately, it was Chan who selected the right moment to get all his chips in the middle, and delighted his team captain when his 4♦ 4♥ held on against Grospelier´s A♠ 6♠ to put Team America back in the lead.

Hellmuth Comes from Behind to Clinch Team America Victory

Phil Hellmuth may have had a fruitless week in search of his twelfth WSOP bracelet and points for the Player of the Year Leaderboard, but he knows a thing or two about playing heads-up. Having been wounded by Lykov´s massive bluff in the second leg of the event, he allowed the young Russian to bully his way into a lead with some aggressive betting, before hitting back with K♣ J♦ versus Lykov´s 5♦ 5♣ – Hellmuth´s Jack pairing on the flop – and tying the leg up when his Q♣ paired on the board and held against Lykov´s shove with K♣ 9♣.

Plans are being suggested for a re-match in 2013, but possibly something will have to be done about the structure and the entertainment value of the players participating. Grospelier was forced into playing Tony G and Jake Cody in the first leg because of their involvement in the WSOPE Main Event and pairing of Gus Hansen and Max Lykov was not made in comedy heaven. The match between Grospelier and Chan was compelling, but with Hellmuth and Negreanu being unusually subdued (and the absence of Doyle Brunson) there was something missing from the event. Television will have the final say no doubt.