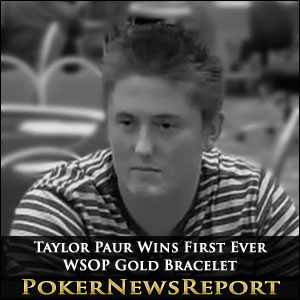 It took little over an hour for the first two players to be eliminated from the final table in what was likely the most epic hand of the tournament. Kyle Cartwright was sent packing in ninth place while Ryan Austin finished in eight spot when he was eliminated in the same hand.

The man who finished them off was Taylor Paur, who called both players’ all ins before the flop with A♣ A♦. Cartwright showed Q♦ Q♥ while Austin showed J♠ J♦ and both players needed something on the board if they were to stay in the event.

This did not happen, however, as it was Paur who hit a set on the turn when the A♠ was shown, confirming him the winner of the hand while cutting the table down to seven players.

Daniel Idema was the next to be eliminated from the final table after he lost his remaining chips to DJ MacKinnon. Idema went all in before the flop with K♦ Q♠, but unfortunately for him, MacKinnon had A♥ A♠. The Ace held on the board, and MacKinnon even got a nut flush after four hearts were shown on the board.

Next to go was Phillip Hui, who was eliminated by Alex Barlow in sixth place. Hui, who was short stacked by that point, moved all in with 8♦ 9♠, which was called by Barlow and his Q♠ Q♦. While Hui hit a 8♣ on the turn, it was not enough to break the Queens of Barlow and he was knocked out of the event.

Five handed play lasted a few hours before someone was finally eliminated from the event in fifth place. That unfortunate accolade went to MacKinnon, who went all in with K♠ K♣ before the flop and was snap called by Paur, who – once again – showed Aces A♦ A♥.

To rub salt into MacKinnon’s wound, Paur also hit a nut flush on the river when a fourth heart on the board was shown, which was exactly what happened when MacKinnon eliminated Idema.

Paur struck again to claim his fourth final table scalp in the very next hand after he eliminated Barlow from the tournament. Barlow, who had K♦ 9♠, went all in for 115,000 pre flop and was called by both Paur and Roy Weiss. The flop came K♠ 7♣ 3♥, which gave Barlow a pair.

Weiss and Paur both checked the board up to the river, after which Paur bet 60,000 and Weiss folded. Paur showed A♠ 8♦, which gave him the higher pair after the A♥ came on the river, beating Barlow and sending him out with $106,027.

Although Paur had a massive chip lead at the start of three-handed play, neither Weiss nor Tai Nguyen were willing to surrender easily. It did not take both players long to add to their stacks, and it appeared Paur may soon have gotten a run for his money.

Eventually, however, Paur reappeared to take yet another scalp as he knocked Nguyen out in third place. Nguyen called Paur’s pre flop raise before the first three cards came 7♠ 9♠ 3♦ and, after a few raises and reraises, Paur put Nguyen all in.

Nguyen showed Q♠ 10♠, which gave him a flush draw while Paur showed A♠ K♠, giving him the higher flush draw after the flop. The turn came J♠, which gave both players their flushes, but also gave Nguyen an inside straight flush draw.

Another spade did come on the river, but fortunately for Paur it was not the Eight, but rather the 6♠, which gave him the hand and eliminated Nguyen from the tournament.

The elimination left Weiss and Paur in heads-up play and Paur initially had a 3.37 million chip lead. Weiss would not be denied, however, as he won a number of solid hands to boost his stack and eventually took the lead from Paur.

His lead did not last long, however, as Paur retook it before a dinner break. Weiss decided on a change of tactics following dinner and went all in on the majority of hands dealt following the hour-long break.

The strategy worked for a while as Weiss again retook the chip lead briefly before it all backfired. Weiss lost a major showdown to Paur, which put him back in front and kept him there before the last hand of the event was played.

Weiss once again moved all in in that hand, which was called by Paur before he showed A♦ 5♦. That was ahead of Weiss’ hand, which was K♣ 8♣, and Weiss found himself out in second place after Paur hit trip Aces on the turn.