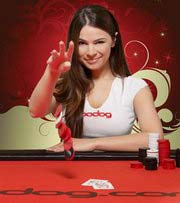 Quirky online poker room [geolink href=”https://www.pokernewsreport.com/bodog-poker”]Bodog Poker[/geolink] have announced their latest acquisition today: beautiful Bosnian-born Tatjana Pašalić. The energetic 26 year old joins a team which already includes Evenly Ng and David Williams. Speaking on her signing, Pašalić made it clear she has faith in her new employers: “Bodog’s brand is the one that fits me best…from the photo-shoot onwards everybody at Bodog has had a wicked sense of fun which is what I am about too so the synergy is obvious…They’ve all shown me great support already so it’s now just up to me to take down the World Series!”

Although she may have seemed to spring from nowhere, Pašalić has been involved in the poker industry’s back rooms for a good few years. Discovering online poker at a young age while living in Croatia, she quickly developed a love for the game. After working as the Country Manager for a poker company, she blogged for a tournament in Monte Carlo. Discovering an aptitude for the writing style, she went on to cover the Malta Poker Tour and the World Series of Poker. Becoming the first ever Croation poker journalist, she quit her job and invested all her savings to follow events such as the European Poker Tour and the World Series of Poker. Her coverage also included local events and interviews. As she was bringing information to her readers straight from the poker tables, her following swiftly grew to thousands. She went on to write poker columns for Playboy magazine and worked as a reported for Poker Europa, under the alias Carrie Mason. She continues to blog for UK poker site On the Rail.

Pašalić has also worked extensively as a presenter. She has covered events in Warsaw and Budapest, as well as being hired by Unibet, World Poker Tour Europe, and Full Tilt Poker. Along with professional player Kara Scott, she co-presented the Women’s World Open IV along with the fourth season of Party Poker’s ‘Big Game’ for PartyPoker.com. She has also interviewed major celebrity players, such as Tom Dwan and Phil Ivey, to great public acclaim.

Her poker playing début did not come until September 2009, when she played  in the Unibet poker tournament. She cashed, coming 46th out of a field of 440 players. After honing her skills online for several months, she played in the March 2009 Women’s World Open IV in London. She finished in 6th place, making it her first televised final table. Using her time behind the scenes of many major events to watch and learn form some of the world’s finest players, she now hopes to tackle the World Series of Poker this summer, and cement her career as an established professional player.