According to a report published in the Wall Street Journal today, ex-players of the online poker site Full Tilt Poker are to be offered equity in the company if the proposed takeover by Groupe Bernard Tapie reaches fruition. 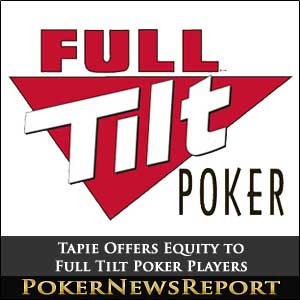 According to a report published in the Wall Street Journal today, ex-players of the online poker site Full Tilt Poker are to be offered equity in the company if the proposed takeover by Groupe Bernard Tapie reaches fruition.

The report, which quotes the source of the news as Laurent Tapie´s solicitor Behnam Dayanim, also claims that the existing owners of Full Tilt Poker would be approached to for an investment in the new company – subject to US Department of Justice approval.

Conditions Still To Be Met

The publication of this announcement seems to be a little premature, as there are still many conditions to be met prior to the Tapie Group assuming control of the company. These conditions include a suitable resolution with the Department of Justice into the actions taken by them subsequent to April 15th, a full audit of Full Tilt Poker´s financial condition (which has been started but is yet to be completed) and agreement from a licensing authority that Full Tilt Poker will be allowed to operate outside of America in the foreseeable future.

Is Tapie Putting Any Money Into the Venture?

The news of the equity offer will also send murmurs of discontent around the poker forums and social networking sites as Groupe Bernard Tapie seems to be committing very little of their own capital into the acquisition of Full Tilt Poker. The investment company have already indicated that they want the Department of Justice to be responsible for repaying players´ bankrolls from the $331 million seized between 2007 and 2011, and have also stated that between 5% and 10% of the equity in the company would be held by ISPT (International Stadium Poker Tours – of which Tapie is a part-owner).

With this latest “offer” to ex-Full Tilt Poker players, plus their invitation for the existing owners to invest into the new [geolink href=”https://www.pokernewsreport.com/online-poker-rooms”]poker site[/geolink], it would appear that Messieurs Tapie and Son want everybody else to play their part and pay their share, while they (in a way yet to be revealed) take a substantial profit from the revival of Full Tilt Poker and the glory for rescuing the beleaguered online poker site. There is something a little disturbing about the way the Full Tilt Poker saga is panning out – but maybe too many of us still have a sour taste in the mouth at just the mention of the name.