Laurent Tapie, CEO of Groupe Bernard Tapie (GBT) – the company seeking to take over Full Tilt Poker – has confirmed that a deal reportedly struck between representatives of GBT and the US Department of Justice to repay ex-players of the suspended online poker site should be confirmed within two weeks. 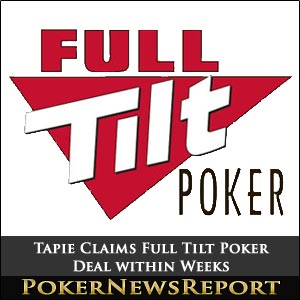 Laurent Tapie, CEO of Groupe Bernard Tapie (GBT) – the company seeking to take over Full Tilt Poker – has confirmed that a deal reportedly struck between representatives of GBT and the US Department of Justice to repay ex-players of the suspended online poker site should be confirmed within two weeks.

Speaking in an interview with the French poker magazine, iGamingFrance, Tapie claimed that the status of the agreement would be changed from “tentative” to “final” once the Full Tilt Poker directors and shareholders have agreed to the acquisition of the company by Groupe Bernard Tapie.

Unclear on How Players Will be Paid

Details of how the frozen funds will be distributed back to players are still unclear. Although it is known that the Department of Justice will be handling refunds to online poker players based in the States, while GBT have agreed to deal with outstanding balances for the rest of the world, nothing has been said about whether players will be allowed to withdraw balances immediately or whether the funds will be released over a period of time.

Other Issues Exist Before Repayments can Begin

There are many other issues involved in the repayment of player´s funds – most importantly to RoW players that cashouts requested after Black Friday were never received, and the DoJ will experience its own problems trying to identify which players benefitted from Full Tilt Poker´s “oversight” of not being able to accept payments made through certain payment processors.

There is also the question of where the new Full Tilt Poker will get their licence from. Groupe Bernard Tapie may be able to pull some strings with the French poker licensing authority ARJEL and pay a substantial sum to the Kahnawake Gaming Commission for a temporary license, but if the company wants to been seen as credible and attract online poker players back onto the site, they are going to fulfil the licensing requirements of the AGCC and segregate players funds in a secure account. This may cause a problem for Tapie, who has demonstrated that he wants to put as little of his own cash into the venture as possible.

A Step in the Right Direction on a Slippery Path

Tapie´s claims of a defined payment structure being confirmed once the Full Tilt Poker shareholder´s vote goes in his favour is a step in the right direction, but the path to raising Full Tilt Poker from the ashes has a long way to go yet. Laurent Tapie had previously announced that he intended to have the Full Tilt Poker web site up and running again by January 2012. This now seems unlikely and, with the past history of the Full Tilt Poker directors, it is no foregone conclusion that they will accede to the terms of the GBT takeover. Watch this space!