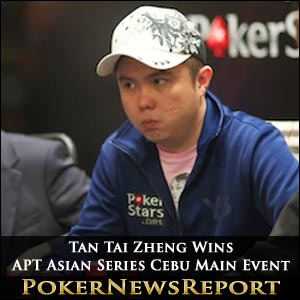 However, by displaying great aggression and skill, Zheng emerged victorious to leave runner-up Razavi with PHP 1,925,000 as a rather handy consolation prize.

But he almost doubled that with his $85,914 prize in Cebu City – and will no doubt be aiming to soon add to his single live tournament poker victory from last year, when he took down the HK$1,000 buy-in No-Limit Hold’em Rebuy event for $11,074 as part of the Macau Poker Cup October Special, once again in the Lisboa.

Zheng certainly became more forceful when heads-up play began, almost immediately raising all-in on a board of 8♣ 8♠ 9♣ 6♣ with just 6♦ 4♦ for two pair to find himself seemingly crushed by the K♣ 3♣ of Brighton’s Razavi, who held a king-high club flush.

However, all that changed the moment the dealer laid down the 8♦ on the river to give the Singaporean a full house to beat out the Englishman’s flush and leave Razavi crippled.

The title was decided the very next hand when, on the button, Zheng put Razavi all-in. The Singapore player was way ahead with his A♦ 8♦ against the A♠ 7♦ of last year’s United Kingdom and Ireland Poker Tour (UKIPT) Cork main event champion.

The 9♠ Q♦ 3♦ flop changed little as only a seven would do for the Brit, while he could also hope for two more overcards for a split pot – although diamonds would be no good as Zheng held the flush draw.

The J♦ on the turn ended the hand, though, as Zheng did complete his flush. The 6♣ river was irrelevant as the Singaporean was crowned champion in Cebu as the APT arrived in the nation where it all started back in 2008, the Philippines.

Razavi took home $45,649 for his second place and, while that is a nice pay day, it is still some way behind the $100,628 he pocketed for winning in Ireland last May, and even further removed from the $222,530 garnered when finishing sixth in the Aussie Millions AUD$10,000 No-Limit Hold’em main event last January.

Third place and PHP 906,000 went to Finland’s Mika Viholainen, fourth was taken by Beijing-based German Bjoern Wiesler for PHP 679,000, while another Singaporean, Tan Gay Peng, finished in fifth for PHP 566,000.

Not even a 6.8 earthquake to start proceedings in central Philippines could halt play on the penultimate day, though, as an action-packed start saw numerous players being sent to the rail.

Sweden’s Andreas Lindblom, the defending champion, was eliminated outside the money when his A♣ Q♥ failed to beat out the A♠ K♠ of his opponent.

Singapore-based Dutchman Edwin De Jong became the unlucky money bubble boy after his 8♦ 8♠ failed to hold against the A♥ Q♠ of Teo Shei Wei when a queen arrived on the turn.

Razavi and Evans doubled-up early on the final day, before Su – who had started as the shirt stack with just four big blinds – was sent to the rail in 10th place when the South Korean’s K♥ Q♦ failed to improve sufficiently against the A♥ K♣ of Razavi.

Han Ruo was next out when his all-in move while holding 8♦ 7♣ was cruelly beaten by Ho’s A♣ J♦. A seven from the flop gave Han Ruo a pair, but an ace on the river sent him out in ninth.

Melbourne’s Duff – who had been chip leader after Day 1a – made his all-in move with pocket nines, only to lose out when final-day chip leader Zheng called with K♠ 8♣. The river provided the card Zheng needed, the K♣, and that was Duff out in eighth place.

Ho, who had at one stage been chip leader at the final table, was, however, eliminated in seventh as his J♠ 10♦ lost out to two overcards, while Evans hit the rail in sixth spot, and was followed by Peng, Wiesler and Viholainen to leave us heads-up.

The next leg of the tour arrives back in the south-east Asia country for the APT Philippines, which will run from April 19 to 25 at Pasay City’s Resorts World Manila and offer a $2,700 buy-in main event.