Tan Le turned a free seat promotion for playing £0.25/£0.50 cash games on the DTD website into a £50,000 payday by winning the Dusk till Dawn Grand Prix 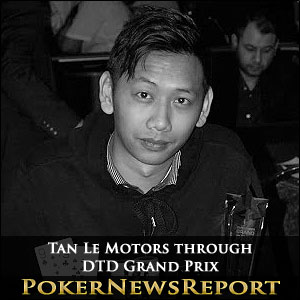 Tan Le turned a free seat promotion for playing £0.25/£0.50 cash games on the DTD website into a £50,000 payday by winning the Dusk till Dawn Grand Prix

After looking as if the Dusk till Dawn £250,000 guaranteed Grand Prix was heading for a massive overlay, players came out in support of the event in huge numbers. An incredible 4,932 entries participated in the twenty-four starting flights – meaning that the club had to chip in a little money to make up the prize fund, but nothing like the £60,000 overlay that was being talked about last week.

As well as being able to buy-in directly for £50.00 + £10.00, a number of promotions were made available to players who wanted to take part in the Grand Prix – including the cash games free seats promo which enabled Tan Le from Birmingham to qualify his way into the online Day 1s and progress through to the live Day 2 at the club in Nottingham.

Once all the online Day 1s had been completed, 388 joined the live action on Day 2 of the DTD Grand Prix – all of whom were guaranteed a min cash of £250.00, and all having a chance of collecting the £50,000 first prize and achieving the glory of becoming a Grand Prix champion.

At the top of the Day 2 starting field, three players had broken through the 600,000 chip barrier while playing online – Kyriacos “Greek Jack” Dionysiou, Hasmukh Khodiyara and Antony East – but players lined up behind them included Julian Thew (491,600 chips) and Peter Wrigglesworth (292,000 chips), who would have been chip leader going into Day 3 had he not lost a 3.5 million chip pot against Jarrod Welsh (K♥ Q♠ > A♣ 10♣ on a flop of Q♣ 8♣ 4♦) in the last hand of Saturday night.

Thirty-seven players survived a long Day 2 of action on Saturday, to return on Sunday morning for the climax of the Grand Prix – nine of whom had the Golden Chips that were awarded for early qualification into Day 1 and which would reward the holders with a €7,500 package to next month´s iPoker Caribbean Poker Tour if they reached the eight-handed final table, or a €50,000 Dusk till Dawn sponsorship package if they were to go on and win the event.

Those in the best position to make a run for the final table included Marc Moss (4.5 million chips), Jeremy Betts (4 million chips) and Lloyd Houston (3.665 million chips), while Julian Thew was still going strong (2.085 million chips). Tan Le (1.88 million chips) had plenty of work to do – as the average chip stack was 1.95 million and blinds were now 40,000/80,000 – but unfortunately for Peter Wrigglesworth, he was eliminated in the first hand of the day JJ > A-10 by Rubin Phan.

Matts Rosen improved dramatically during the early levels of Day 3 to take the chip lead, after taking 575,000 chips from David Milligan in a bluff > bluff hand and then busting Julian Thew in thirtieth 88 > K-Q. Rubin Phan moved up behind him in the chip counts when he flopped a set of Jacks to crack James Lee´s pocket Aces and David Milligan recovered from his earlier set-back to take third place as twenty-five players remained by crippling Marc Moss KK > 99.

Tan Le also quickly moved through the gears – busting Anthony Arlott A-J > 88 and then Dewi James JJ > A-K, before getting involved in the biggest pot of the tournament to date – a pot which saw Tan Le rocket into the chip lead with more than 8 million chips .

On a board of 2♣ 6♦ 3♣, Tan Le (A♥ 2♥) led out for 755,000 chips, to which Rubin Phan (K♣ K♠) moved all-in for almost two million chips. After a long period of hesitation Le made the call and was in trouble until the A♣ spiked on the River to bust Phan from the Grand Prix in twenty-second place.

All Change Up Top (Again) as Chips Fly

Tan Le´s stay at the top of the leaderboard lasted just a couple of hands. Thomas Busst doubled up K-4 > 88 to take 2 million chips from Le´s stack before David Milligan (K♣ 8♣) flopped trip Kings to eliminate Matts Rosen (5♠ 5♥) and chip up to 12 million chips. Chin Chai Koh (aka “Chinese Frankie”) turned an Ace to best Jarrod Welch´s pocket Kings and temporarily take over at the head of the chip counts before David Milligan recovered the lead by busting out Gordon MacArthur in eleventh place A-3 > 22.

However, as the eight-handed final table grew closer, it was Tan Le who moved up another gear to bust Jeremy Betts in tenth (A-K > A-J) and force Shane Cotter out of a 3 million chip pot – the final table being set when Chin Chai Koh (8-9) paired the Nine in his hand to eliminate Lloyd Houston (2-2).

Rahim Walji was also out of the tournament quickly, failing to get passed Tan Le´s 5♥ 5♦ with A♥ 6♦, and Shane Cotter was busted in sixth – moving all-in with A♦ 6♦, being called by David Milligan (9♠ 9♥) and seeing the 9♠ come out first on a diamond-less flop. Within the same level, Le Tan took control of half the chips in play when eliminating Jonathan Kalmar A♠ K♠ > A♦ Q♥.

Of the nine players that had started the day with the potential bonus of a £50,000 sponsorship package, just two remained – Chin Chai “Chinese Frankie” Koh and Kyriacos “Greek Jack” Dionysiou. Both had won packages to the iPoker Caribbean Poker Tour by making it to the final table, but neither found the luck when they needed it to win the event.

Le Wins Heads-Up in One Hand

The winner of the Dusk Till Dawn 2013 Grand Prix was decided in just one hand. Both Tan le and David Milligan got their chips in pre-flop:-

The flop of 2♠ 2♥ 6♠ gave Milligan two cards to complete his flush or pick up an overpair, but the 6♦ on the Turn and 2♣ on the River gave Le the hand and the title of DTD Grand Prix Champion.