This Easter weekend there are some exciting opportunities to qualify for Americas Cardroom´s forthcoming High Five Series and the Million Dollar Sunday event. 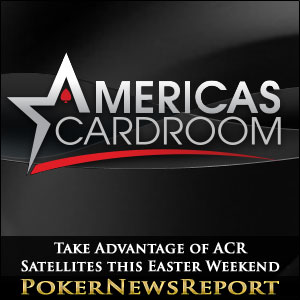 This Easter weekend there are some exciting opportunities to qualify for Americas Cardroom´s forthcoming High Five Series and the Million Dollar Sunday event.

This coming weekend is traditionally one of the quietest weekends of the year for online poker due to family vacations and religious convictions. It is also one of the best weekends to take advantage of low entry satellites offering a guaranteed number of seats into forthcoming tournaments.

Americas Cardroom´s High Five Series is a tournament series of twenty-five events played between next Wednesday (April 8) and the following Sunday (April 12). Five tournaments are played each day over the five days of the series in a variety of disciplines and formats. Buy-ins start from just $2.20 and the series culminates with a million dollar guaranteed Main Event with a buy-in of $540.00.

The majority of the twenty-five tournaments will very much appeal to “poker purists” – with deep stacks, long levels and extended late registration periods. However, there are a handful of turbo and hyper-turbo tournaments to please players who want to get to bed at a reasonable hour and Omaha players will not be disappointed with the range of events included in the schedule – including a PL08 KO event on Saturday April 11.

The Million Dollar Sunday tournament is the Main Event of the High Five Series and gets underway on April 12 at 3:00pm (ET). Guaranteeing a million dollar prize pool and $200,000 to the winner, the tournament is sure to be popular – but will it result in an overlay? Quite possibly – despite five hours of late registration and unlimited re-entries during that period.

Due to the significant buy-in ($540.00) being beyond the bankroll of most players, Americas Cardroom has been hosting a comprehensive satellite schedule over the past few weeks. These culminate with a series of mega-satellites for the Main Event next week which guarantee a combined total of 440 seats into the target event, and it is these that we have targeted for our own route into Americas Cardroom´s Million Dollar Sunday.

However, rather than wait until next week to invest more than a couple of hour´s pay into the mega-satellite tournaments, we have identified some sub-satellites that take place over the Easter weekend which guarantee seats into the above-mentioned mega-satellites.

Satellites and sub-satellites for other events in Americas Cardroom´s High Five series will be added to the poker client this weekend – so keep a lookout for other tournaments that might provide some excellent value.

Freebuys are Back and a Reload Bonus

Easter Sunday also sees the return of Americas Cardroom´s popular “Freebuy” tournaments – tournaments with guaranteed prize pools which are free to enter, but which offer players the opportunity to re-buy chips and bump up their stack with an add-on at the end of the re-buy period. Three “Freebuy” tournaments are scheduled for Easter Sunday at 7:00am, 2:30pm and 10:00pm (all times ET), each with a guaranteed prize pool of $5,000. Check them out now in the tournament lobby.

Americas Cardroom is also offering a reload bonus to players from next Monday (April 6) until April 12. The bonus is a 100% match on reload deposits of up to $500 and is cleared at the rate of $5.00 per 120 Award Points (Award Points being awarded at the rate of 5.5 per $1.00 contributed to the rake or paid in tournament entry fees). Players have 45 days before the bonus expires and, to be eligible for this bonus, players must use the reload bonus code “HIGHFIVE” when making their deposit.

Don´t Miss Out on the Superb Opportunities at Americas Cardroom

It is fair to say that there are some exciting times ahead at Americas Cardroom, and if you are not yet playing at the site, you are missing out on some excellent promotions, the most valuable player rewards program of any US-facing poker room and some lucrative opportunities to make some serious money at the poker tables.

Check out our [geolink href=”https://www.pokernewsreport.com/americas-cardroom”]review of Americas Cardroom[/geolink] for further information about this leading online poker site and register for an account today to take advantage of the first deposit bonus of up to $1,000 (use the Americas Cardroom bonus code “[bonuscode room=”americascardroom”]” for your first deposit) and the superb opportunities to qualify for valuable events this Easter weekend.