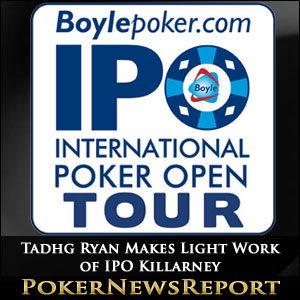 The third leg of the 2014 Boylepoker International Poker Open Tour finished last night, with Tadhg Ryan winning the €230.00 buy-in Main Event ahead of a field of 374 which included IPO Galway runner up Geoff Healyand finalist from the 2013 IPO Dublin Main Event, Alan Daly.

Both Healy and Daly made the final table of the IPO Killarney Main Event – Daly being responsible for bursting the 39- player bubble when his A♣ 5♥ found four hearts on the board to crush Adrian Adryjanek´s A♦ Q♣, and leading the final table when the eight remaining players returned to the Gleneagles Hotel in Killarney yesterday:

The early action of the final table saw John Hanaphy take the chip lead with a turned Broadway straight against Alan Daly, before Paul O´Brien spiked a spade Flush on the River to double-up against Hanaphy and put Alan Flannery on top of the chip counts. As blinds rose to 50,000/100,000 Geoff Healy was the first player to bust when Alan Daly flopped a pair of Kings to best Healy´s A♠ 9♣, but Daly´s return to the top of the leaderboard was short-lived – doubling up Ciaran Cooney Q♥ Q♣ > A♦ K♣.

Rash of Players Hit the Rail

Four more players were to bust in the next hour – Paul O´Brien leading the procession to the cashier´s desk when his A♦ 10♦ failed to improve past Alan Flannery´s A♥ K♣, Liam Delaney following him after the next hand in which he got all-in with Queen-high against Tadhg Ryan´s Ace-high, Alan Flannery winning the battle of the Alans to send Alan Healy to the rail with a rivered straight, and Tadhg Ryan flopping a pair of Aces to eliminate Ciaran Cooney (Q♥ 6♥) in fourth place.

Ryan Motors Ahead – Wraps up Tournament in 30 Minutes

During the rash of eliminations, Tadhg Ryan had moved into a massive chip lead – aided by a double-up against Alan Flannery when he again paired his Ace on the flop against Flannery´s pocket Fours. Ryan had approximately 6 million chips when three-handed play got underway, while his two opponents were sitting behind stacks of approximately 2.5 million chips.

Ryan increased his advantage when busting John Hanaphy in third place Ace-King > pocket Nines, and the heads-up against Alan Flannery lasted just one hand – Flannery moving all-in with A♦ J♦ and Tadhg Ryan making the call with pocket Eights. Ryan hit a set of Eights on the flop of 10♣ 8♦ 6♣, and with no diamonds appearing on the Turn or River, Tadhg Ryan had won the IPO Killarney Main Event for €18,250 after a final table re-adjustment of the prize money.