Polish poker player Szymon Pieszczoch has the leading chip stack after the second day of the World Poker Tour’s Spanish Championship in Barcelona after another 65 entrants crashed out to leave the tournament with 51 players remaining for today’s third day. 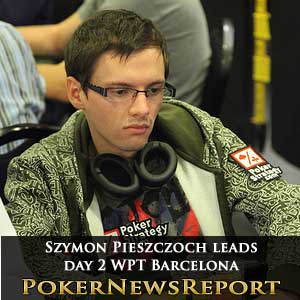 Polish poker player Szymon Pieszczoch has the leading chip stack after the second day of the World Poker Tour’s Spanish Championship in Barcelona after another 65 entrants crashed out to leave the tournament with 51 players remaining for today’s third day.

There was lots of fast play on Day 2 at the Gran Casino in the Catalonian capital city yesterday, but it is Pieszczoch who takes the biggest chip stack into today after removing dangerous Russian Artem Romanov late last night.

The hand that gave Pieszczoch 411,000 chips to play with – way ahead of second-placed Spaniard Jesus Cortes Lizano’s 320,500 – was a thriller.

Romanov opened with a bet of 5,000 and received three callers, before Pieszczoch three-bet to 18,500 while in the big blind.

Undaunted, Romanov shoved all-in and, everyone bar Pieszczcoch, folded as quickly as they could.

However, with the board showing Kd-8h-3c-4d-6c, Romanov was eliminated as Pieszczoch established a healthy chip lead of 90,500 chips over Lizano as the day came to a close.

Frenchman Romain Matteoli starts today third on 297,500 chips, while Day 1A leader Artur Koren – now in fifth place – is still in contention on 269,500.

Not too far behind is British star Daniel Morgan in seventh place with 221,000. The youngster will be hoping for a repeat showing today after recently lifting the Oxford Cup Student Championship.

Eric Sullivan – who declared on Thursday that he was “f**king boss of the room” following an impressive bluff move – also made day three, but is way behind the leaders on 76,000, while big names Per Jacobson, of Denmark, and Finnish star Juha Helppi are also still in contention.

But the female players are also well represented, with Barbara Martinez, of France, eighth on 215,000 and Italian Michelle D’Aniello ninth with 210,000 chips.

The bubble should be burst some time today as 27 make the money with play then continuing until a final table is achieved, although play will be suspended for the Champions League final at Wembley in London as Manchester United face Barcelona.