Tomorrows stars of the poker world gathered yesterday at the G Casino in Coventry for the start of the GukPT-sponsored UK Students Poker Championships. 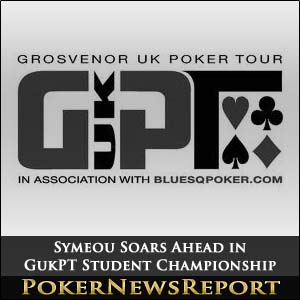 Tomorrows stars of the poker world gathered yesterday at the G Casino in Coventry for the start of the GukPT-sponsored UK Students Poker Championships.

The event, which was first held in the grounds of St Andrew´s University in 2005, has grown in popularity every year and – with the bonus of a seat in the £2,000 GukPT Grand Final available for the 2013 winner – this year´s £35.00 buy-in tournament looks as if it will break all previous records.

Previous players who have participated in the GukPT UK Student Poker Championships have included EPT winners David Vamplew and Rupert Elder, while 2009 UKSPC winner Greg Yates went on to further success in the World Amateur Poker Champions in 2011 and the Genting GPS Poker Series in 2012.

In addition to the individual winner´s prize – estimated to be around £2,500 this year – there is also a fierce competition between the university poker societies. In addition to crowing rights, this year´s rivalry has been enhanced by Grosvenor Casinos offering five seats to the GukPT Goliath which takes place in August and has a guaranteed prize pool of £200,000.

Essex University Poker Society – whose most famous former society member is Chris Moorman – has traditionally done well in the UK Students Poker Championship, and the university provided the runner-up in the 2011 tournament – Aksel Ry – as well as the winner in 2007 – Joe D´Angelo – who went on to play in the WSOP Main Event.

Good Turn-Out for Day 1A

By the end of Day 1A, 206 players had entered the Main Event or used their second bullet (re-entry is also available for Day 1B), threatening the previous record of 357 entries set in 2011. Only 38 players remained when play was halted for the night, with Andrew Symeou bagging up a massive 392,100 chips for the overnight lead.

Symeou, and the other survivors from Day 1A, will be back on Thursday to play down to a winner with those who make it through Day 1B which starts at 12.30pm today.