With only 18 players remaining in the WPT Montreal Main Event, Sylvain Siebert takes a narrow chip lead into the penultimate day ahead of Derrick Rosenbarger. 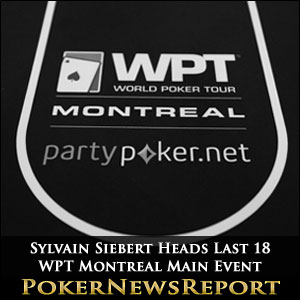 With only 18 players remaining in the WPT Montreal Main Event, Sylvain Siebert takes a narrow chip lead into the penultimate day ahead of Derrick Rosenbarger.

Day 3 of the PartyPoker WPT Montreal Main Event started with fifty-nine players returning – all assured of a $9,037 min-cash, but with eyes on the $500,824 up top for the winner of the event and a seat in the WPT World Champions tournament which takes place next April at the Borgata Casino in Atlantic City.

The action at the beginning of the day was pretty frantic – and overnight chip leader Ludovic Lacay quickly extended his chip advantage by busting out the unfortunate Alex Venovski K♥ K♦ > J♣ J♠ – but the day quickly centred around two players – Sylvain Siebert and Derrick Rosenbarger – who, at one point looked as if they were going to run away with the event.

Sylvain Siebert was almost out of the WPT Montreal Main Event before his seat had a chance to warm up. In one of the first hands of the day, Siebert shoved into a three-way pot with A♠ 9♣ and received calls from both Jonathan Little (10♦ 10♣) and Kevin MacPhee (J♥ J♣). An Ace on the flop saved Siebert from an early shower and chipped him up to 675,000 chips.

Siebert then accounted for three players during Level 23 (blinds 10,000/20,000- ante 3,000) to increase his stack to 4 million chips. First, Andy Hwang (A♠ K♥) failed to improve past Siebert´s pocket Sevens to be eliminated in 32nd place, then Siebert bust out Marc-Olivier Carpentier in 30th place A♠ Q♦ > 8♣ 8♠ and finally Siebert sent George Biliouras to the rail in 28th place when his K♣ 8♣ completed a flush on the Turn to best Biliouras´ A♠ Q♠.

Despite Sylvain Siebert´s trio of knockouts, the chip lead at the end of the level was held by Derrick Rosenbarger. Rosenbarger had taken three streets of value from Jonathan Little when his A♠ K♦ had flopped a Full House, and then bust Samuel Tsehai in 25th place when Tsehai (Q♣ J♣) missed his Flush draw against Rosenbarger´s paired K♥ Q♦.

Rosenbarger finished Level 23 with 4.32 million chips, courtesy of the dual knockout of Ramzi Karam (10♣ 10♠) in 24th place and Michael Korovine (Q♠ Q♣) in 23rd. Korovine had been the aggressor in the pre-flop betting and had put Karam all-in. Rosenbarger had both players well covered and made the call with K♥ K♠. The board ran A♦ 7♣ 5♦ / 7♦ / 5♠ to elevate Derrick Rosenbarger into a clear chip advantage.

The Field Battle Back

When Level 24 began (blinds 12,000/24,000 – ante 4,000), only three players had to be eliminated before play would be suspended for the night. Incredibly, within the time it took for Daniel Ghionoiu (21st), Yann Dion (20th) and Anthony Pace (19th) to be sent to the rail, both Sylvain Siebert and Derrick Rosenbarger had seen their chip stacks reduced to fewer than 3 million chips.

First Amir Babakhani (Q♣ Q♦) hit a set of Queens on the Turn to double-up against Siebert´s A♠ 10♣, and then Patrick Eskander twice took big chunks out of Rosenbarger´s chip stack to reduce the former chip leader to 2,875,000 chips and second place on the overall leaderboard.

Looking Ahead to Day 4 of the WPT Montreal Main Event

When play resumes at the Playground Casino on Montreal, the eighteen remaining players will be half-way through Level 24. Play is scheduled to continue until six players remain – who will then compete for the title and ½ million dollar first prize on Thursday under the blaze of TV lights. Those in the prime positions for a TV appearance include: