Switch Poker has announced that players seated at the table and dealt cards in the site’s upcoming hand no. 12,000,000 will share a cash bonus of €500. 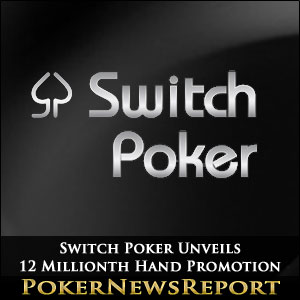 Switch Poker has announced that players seated at the table and dealt cards in the site’s upcoming hand no. 12,000,000 will share a cash bonus of €500.

Following its launch in October 2010, Switch Poker has established a loyal customer base among online poker players who log on and play via mobile devices. In roughly 3 and 1/2 years, the poker room is embarking on 12 million hands dealt and is showing its gratitude to players by offering a cash bonus to those lucky enough to participate in the milestone hand.

Taking a cue from PokerStars, who routinely offer milestone hand promotions, Switch Poker is also getting in on the act of rewarding milestone hands with a cash bonus. All of the players who contribute to the pot in Switch Poker’s 12 millionth hand will equally share the €500 bonus prize.

Switch Poker counts its play-money and real-money hands together. If the 12 millionth hand happens to be dealt at a play-money table, the cash bonus will be awarded to the next real-money hand. Players who participate in hand no. 12,000,000 will receive the bonus credited to their accounts immediately but will have to rack up 5,000 Switch Poker Points (SPPs) before a withdrawal is permitted.

Although 5,000 SPPs may sound like a herculean task, it actually is not considering that players are awarded 100 SPPs for ever $1 in rake. Loyal Switch Poker players can generate 5,000 SPPs in short order, especially since multi-tabling up to four tables simultaneously under high-resolution graphics is permitted.

As Switch Poker is the online poker industry’s premier choice for playing poker on the go, the site’s deposit bonus reflects that by offering an iPad or iPod Touch to first-time depositors. Those who deposit more than $50 are eligible to collect either bonus prize. Accumulating 60,000 SPPs will get the iPod Touch, while 100,000 SPPs are required to win the iPad.

A full six months is permitted in which to amass those SPPs, plenty of time for even casual players to rack up the required Switch Poker Points and claim a new mobile device for enhanced online poker pleasure. Don’t forget to use [bonuscode room=”switchpoker”][/bonuscode] as your sign-up code when making that first deposit.

It should also be stressed that although Switch Poker caters to players who are mobile while playing, there is nothing that prevents those who choose to do so to log on and play at Switch Poker from a desktop computer. The choice is yours whether you want to aim for hand no. 12 million while relaxing at home or while playing on a mobile device from wherever you happen to be at the moment.