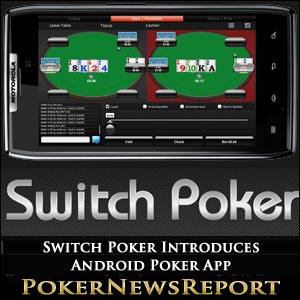 The Switch Poker Android app is currently the only Android poker app featuring real money play that also allows users to view numerous tables on the screen simultaneously, permitting multi-table poker players to play faster and with greater ease. With the enhanced ability to ‘swipe’ between poker tables, the user-friendly app permits players to play many poker games at once on the smallest of devices.

Unlike similar Android poker apps, the Switch Poker Android doesn’t require Flash and is harmonius with Android models 1.6 and up, covering more than 99 percent of current Android devices. It is also compatible with either large or small Android screens, adjusting the view smartly to fit the size of the screen used.

Unlike other [geolink href=”https://www.pokernewsreport.com/mobile-poker-sites”]mobile poker sites[/geolink], Switch Poker Android app users are able to register, deposit money and play, all accomplished from within the Android app.

Switch Poker is the only online and mobile poker room permitting players to deposit via Bitcoin. As a peer-to-peer currency, Bitcoin is also revolutionizing the online poker industry by allowing payments and financial transactions to be forwarded directly from person-to-person without requiring a bank or financial institution to act as an intermediate party.

We were the first company to launch a poker app for iPhone, pioneered play with Bitcoin, and now the first to allow players register, deposit and multi-table on Android devices, said Switch Poker co-founder, Conor McCarthy. We aim to continue to innovate in mobile poker and give players what they want.

Online since Oct. 2010, Switchpoker offers internet poker players the ability to play their favorite poker games while on the go. As the first real money online poker site in the world that allows users in all global markets except the U.S. and France to choose between such innovative mobile devices as the iPad, iPhone and iPod Touch, Switch poker continues to lead the way in technological advances in the online poker industry.

Also accepting payments via Neteller and Skrill, Switch Poker players tend to feel a sense security as both payment processors are regulated by the Financial Services Authority, which garners favorable trust in players’ funds, whether it be a deposit or request for withdrawal.

Recent market numbers show that the total number of Smartphones and Tablets shipped in 2011 was 500 million. Of all downloaded apps, 64% are related to games and gaming. Also, an estimated 50% of Smartphone gamers have played online poker. The statistics clearly show that as a leader in innovative mobile technology, Switch Poker player traffic is expected to boom in the near future as more online poker players will take advantage of the ability to play poker wherever they go.