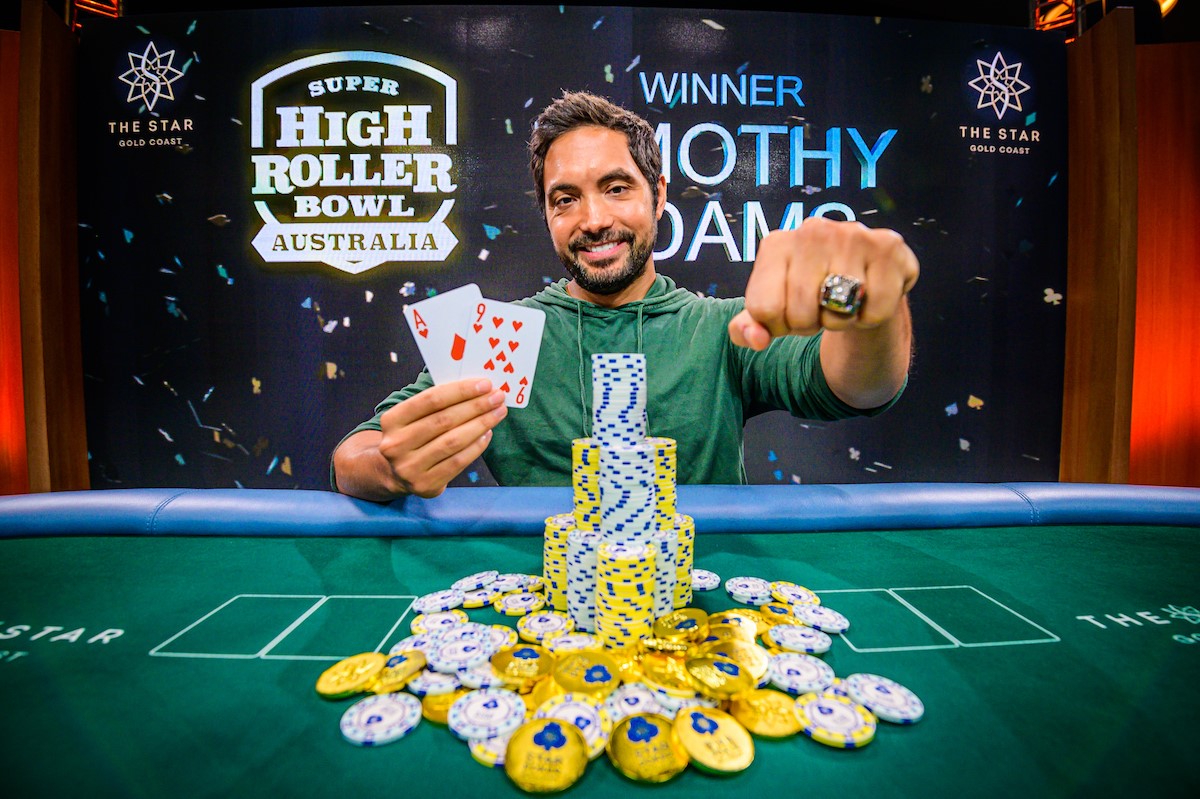 Australia is pretty busy in January. This year, apart from the Australian Open in tennis, Australia also hosted a couple of poker events: the Australian Poker Open and Aussie Millions.

One of the events that really gained a lot of attention was the A$250,000 Super High Roller Bowl Australia, where Timothy Adams managed to win first prize and become the SHRB champion. The Canadian won a total of A$2,160,000, which is roughly $1.44 million.

Although Adams is a pretty active poker player, this is actually the first time he managed to win a money prize in any tournament that is part of the Super High Roller Bowl series. In fact, this amount is the third-biggest cash that Adams has managed to win in a live tournament.

At the moment, his live earnings have surpassed $20 million.

The Super High Roller Bowl Australia saw only 16 entries. This couldn’t really be considered a success, as it was the second-smallest SHRB event ever, with SHRB London being the only one that was smaller than this one.

SHRB Australia — Who Else Took Part in the Event?

Kahle Burns and Elio Fox were two players who managed to dominate in this event for a long time. They were on the top when it comes to the number of chips during the creation of the final table.

Burns, the living Australian poker legend, has had a great year so far, as he managed to win the A$100K Challenge. He has been playing great lately, and all of that resulted in him being introduced to the Australia Poker Hall of Fame.

Although Fox performed rather well, he couldn’t face Burns’ great play and eventually had to hit the rail with no money in his pocket whatsoever. The two players who were in danger to be the ones to burst the bubble were Aaron van Blarcum and Cary Katz.

In the end, it was van Blarcum to do it, leaving Katz, Burns and Adams to play three-handed. All of them had relief as they were the only players who would actually make money from this poker event.

Despite all that, Katz was pretty low on chips and had between 10 and 20 BBs when three-handed play started. He did not survive long in this part of the event and had to hit the rail with A$640,000 in his pocket.

The two remaining players continued to battle on, but, in the end, it was Adams who denied another title to Burns on the home court. Burns ended up with A$1,200,000.

Australia has seen a lot in the past month or so. Although not all of it was good, as the country was struck by never-before-seen bushfire, there are some things that made Australians worry less about the ongoing issue.

January is the month when the Land Down Under wakes up, as many sports events take place there, and it’s usually the time when the entire poker community is focused on this country.

All these events, including the ones that are about poker, donated millions to bushfire relief funds, helping the country get through the crisis.

Therefore, this year, all athletes, as well as all poker players, who took part in tournaments in Australia had a task that was bigger than all the competitions together. It was the task of saving mother nature and helping people and wildlife in danger.