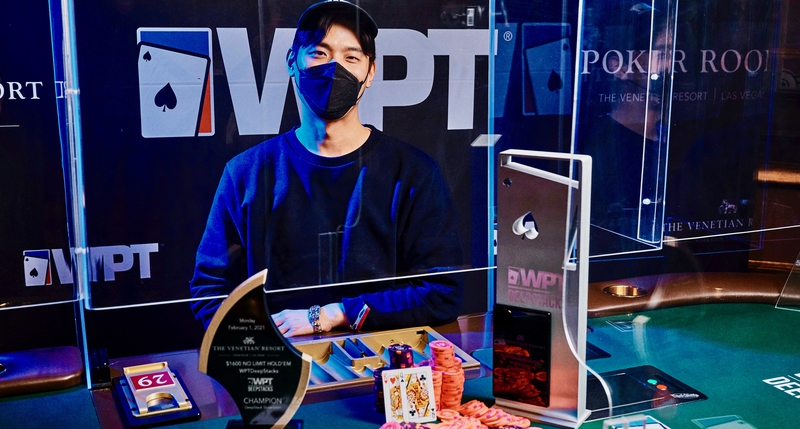 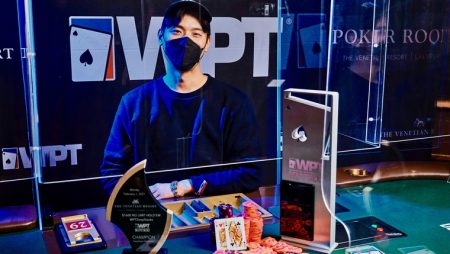 Sung Joo Hyun triumphed at the final table of the World Poker Tour DeepStacks Venetian Main Event to snatch the win, with first-place prize money of $208,335, despite being at the bottom half of the final table. This win ups his lifetime live tournament earnings record to over half a million dollars, specifically $699,320.

The South Korean WSOP Bracelet winner defeated a field of 812 entries in the $1,600 buy-in no-limit hold ’em main event, which took place at the Venetian Resort, Las Vegas. He won his first World Series of Poker gold bracelet slightly over a year ago, in a $500 buy-in WSOP online event with 2,307 entries. He was victorious and walked away with prize money of $161,898.

He also was awarded 912 Card Player Player of the Year points as the winner of this event, which will have him placed at the seventh position on the 2021 Player of the Year race table. The guaranteed prize pool of the 2021 WPT DeepStacks Venetian Main Event which was pegged at $500,000, was doubled due to the number of entries. The guaranteed prize pool became $1,161,160 and was doled out to the top 102 finishers.

Sung Joo Hyun had 1.625 million chips going into the eight-handed final table, which was way off Wayne Harmon’s 8.2 million chips, with only two players having fewer chips than Hyun. Hyun became a contender for the championship when he grew his chip to 8.725 million, having wiped out Curtis Powell in sixth place. Curtis exited with prize money of $41,765.

The chip leader, Harmon, was almost crippled by Hyun later into the game. Hyun had bet 3.375 million, and Harmon called, with Hyun winning the massive pot with a better flush. Harmon grew his stack back up and finished at third place with a $93,280 prize money.

When asked about his game with Harmon, Hyun had this to say.

We have a history because last night he was sitting next to me and bluffing almost every single pot and tabling the cards. There was something going on between us, so instead of value betting small or checking, I overbet every single spot when I had value because I knew he was going to hero call me a lot. That was my strategy against him, and it worked out.

Into the heads-up play with Roman Shainuik, Hyun had 13.310 million chips, and Shainiuk had 11.050 million. This did not last for long as Hyun rapidly increased the gap and came out victorious. Roman Shainuik walked away with prize money of $144,480.

Hyun, on what it means for him to win the World Poker Tour DeepStacks Venetian Main Event said it was all a dream come true though everyone hopes to win. He stated that he had always told his friends he was going to win but has not been able to as often as he would like. He revealed that this was his first live tournament win, and as such, it feels so special for him even more than the prize money does.